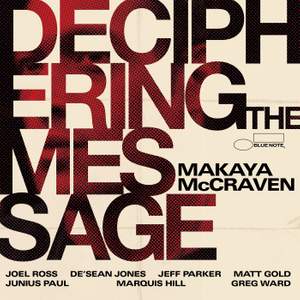 This fine 13-track record finds him re-sculpting originals by the likes of Kenny Burrell, Eddie Gale, Dexter Gordon and more, aided by a live band on saxes, flute, vibraphone and bass and a beatmaker... — Jazzwise, December 2021 - January 2022, 4 out of 5 stars More…

Hank Mobley: A Slice Of The Top

Einar Aaron Swan: When Your Lover Has Gone

Recording of the Week,  Makaya McCraven, 'Deciphering the Message'

Across numerous albums and mixtapes, Makaya McCraven has proven his mastery of the loop akin to hip-hop’s most celebrated beatmakers like J Dilla and Madlib. With his new remix album, Deciphering The Message, the Chicago-based drummer and producer digs through the Blue Note Records vaults to put a modern bounce on classics by Art Blakey, Horace Silver, Hank Mobley, Dexter Gordon, Kenny Burrell, and Eddie Gale, among others.

While Deciphering The Message collects songs from several years of Blue Note history, it plays like a continuous set taking place in one show at one venue. “Pee Wee” Marquette, Birdland Jazz Club’s master of ceremonies from 1949 to 1965, narrates this album, and his inclusion places the LP somewhere on the timeline between jazz music’s transition from bebop to hard bop. “When piecing everything together, I wanted to create a narrative that made the listener feel like they were falling into this space or a movement,” McCraven says. “I was really trying to make a record out of it, not just a series of tracks.”

McCraven has always been a collaborative artist who prefers the energy of in-person sessions over the isolation of creating alone. That’s no different here: Deciphering The Message features new recorded elements from vibraphonist Joel Ross, trumpeter Marquis Hill, alto saxophonist Greg Ward, guitarists Matt Gold and Jeff Parker, bassist Junius Paul, and De’Sean Jones on tenor saxophone and flute. In that way, Deciphering The Message connects the past and present, proving that musicians become legends by trekking the same roads with like-minded creators all moving toward the same goal.

To that end, McCraven hopes the album is both educational and an outright good listen. “I always want to make music that will connect with people in one way, where it makes them nod or feel something or transport them somewhere,” he says. “I also hope this makes them check out the source of this music if they have it. The music that we’re making now is part of the same route and is connected, so I want to honor tradition and release something that people can vibe to.”

This fine 13-track record finds him re-sculpting originals by the likes of Kenny Burrell, Eddie Gale, Dexter Gordon and more, aided by a live band on saxes, flute, vibraphone and bass and a beatmaker sensibility akin to a modern-day J Dilla or Madlib.

By recruiting some of McCraven’s finest contemporaries, such as vibraphonist Joel Ross, alto saxophonist Greg Ward and trumpeter Marquis Hill, Deciphering The Message connects the dots between previous jazz/hip-hop hybrids with the Blue Note catalog — notably Madlib’s blunted Shades of Blue (2003) and the compilation Blue Note Revisited (2004) — with its latest iterations.

Using a pool of star performers, including trumpeter Marquis Hill, guitarists Matt Gold and Jeff Parker, vibraphonist Joel Ross, saxophonists/flutists De'Sean Jones and Greg Ward, and bassist Junius Paul, McCrave has cleverly managed to avoid any sense of clunkiness, and create the illusion that each track has been cooked up live on stage.