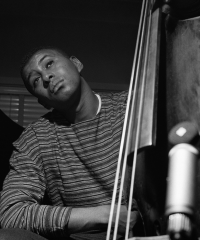 Paul Laurence Dunbar Chambers Jr. was an American jazz double bassist. A fixture of rhythm sections during the 1950s and 1960s, his importance in the development of jazz bass can be measured not only by the extent of his work in this short period, but also by his impeccable timekeeping and virtuosic improvisations. He was also known for his bowed solos. Chambers recorded about a dozen albums as a leader or co-leader, and over 100 more as a sideman, especially as the anchor of trumpeter Miles Davis's "first great quintet" (1955–63) and with pianist Wynton Kelly (1963–68).