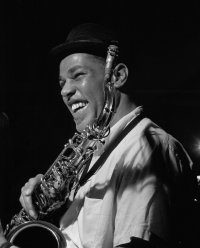 Dexter Gordon was an American jazz tenor saxophonist. He was among the most influential early bebop musicians, which included other greats such as Charlie Parker, Dizzy Gillespie, and Bud Powell. Gordon's height was 6 feet 6 inches (198 cm), so he was also known as "Long Tall Dexter" and "Sophisticated Giant". His studio and performance career spanned over 40 years.

Gordon's sound was commonly characterized as being "large" and spacious and he had a tendency to play behind the beat.