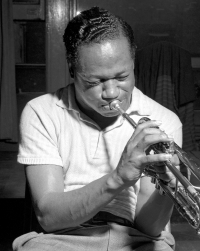 Clifford Benjamin Brown was an American jazz trumpeter. He died at the age of 25 in a car accident, leaving behind four years' worth of recordings. His compositions "Sandu", "Joy Spring", and "Daahoud" have become jazz standards. Brown won the DownBeat magazine Critics' Poll for New Star of the Year in 1954; he was inducted into the DownBeat Hall of Fame in 1972.