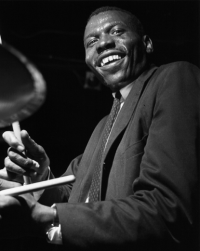 Elvin Ray Jones was an American jazz drummer of the post-bop era. He showed an interest in drums at a young age, watching the circus bands march by his family's home in Pontiac, Michigan. He served in the United States Army from 1946 to 1949 and subsequently played in a Detroit house band led by Billy Mitchell. He moved to New York City in 1955 and worked as a drummer for John Coltrane, Charles Mingus, Teddy Charles, Bud Powell and Miles Davis.

From 1960 to 1966, he was a member of the John Coltrane quartet (along with Jimmy Garrison on bass and McCoy Tyner on piano), a celebrated recording phase, appearing on such albums as My Favorite Things, A Love Supreme, Ascension, and Live at Birdland. Following his work with Coltrane, Jones led several small groups, some under the name The Elvin Jones Jazz Machine.