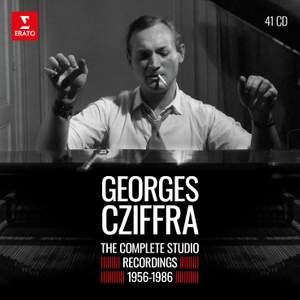 The present boxed set brings together all the studio recordings made by the virtuoso pianist Georges Cziffra (1921-1994) for EMI and Philips, from his first 25cm LP released in 1956 when he arrived in Paris, to the last sessions in the Senlis chapel in 1986 a few years before he died. This thirty-year period covers a consistently varied and thrilling repertoire, the lion share constituted by Lizst and Chopin, but also dazzling improvisations, paraphrases and transcriptions which also bear witness to his mastery, imagination, and musicality. Along with the test recordings from French archive released in 2008, this collection includes for first time a studio recital recorded in Tokyo in 1967 and a live of Tchaikovsky Piano Concerto No. 1 caught in 1957, with no less a partner than Carlo Maria Giulini.