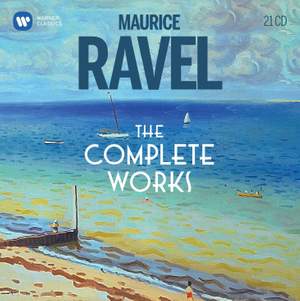 Maurice Ravel’s music reflects the cultural and creative ferment of his times, as the heady sensuality of the Belle Époque made way for neo-classicism, the Jazz Age and modernism. Strikingly diverse in mood and scale, his works assert his distinctive identity, expressed through craftsmanship of the utmost finesse and beauty: deeply sensitive and balancing sincerity, irony and a touch of provocation. An essential collection of landmark performances, this 21-CD box of Ravel’s complete works brings together major interpreters of the present day and preceding generations. There are even contributions from the composer himself, as conductor, pianist (on piano rolls) and artistic supervisor.

The distinctiveness and scope of Ravel’s musical personality is exemplified by two of his most popular works: the exquisite Pavane pour une infante défunte (composed for piano in 1899 and subsequently orchestrated) and the hypnotically repetitive orchestral Bolero (1928). They could hardly be more different, yet each in its way is characteristic of the composer.

The son of a Swiss father and Basque mother, Ravel grew up in Paris and studied at the Paris Conservatoire, where his teachers included Gabriel Fauré. Among other composers who influenced him were Chabrier, Satie and Debussy. In the early 1900s he attempted five times to win the prestigious Prix de Rome for composers, but he failed each time, perhaps due to unorthodox elements in his music. By 1905, when he made his last attempt, he had already built a reputation as a composer and his rejection by the judges caused a public furore.

The First World War, during which Ravel served as an ambulance driver and suffered the death of his mother, proved a turning point in his life and work. His final decade was marred by neurological disease, but he continued to compose masterpieces and to enjoy considerable success and celebrity, both in France and internationally. Famously, even George Gershwin asked him for composition lessons.

Beyond Bolero: There is so much to discover in Ravel’s music

As meticulous as he was brilliant, Ravel was not a prolific composer, but his output was diverse: works for solo piano (a number of which he also orchestrated); ballet music (including Daphnis et Chloé with its spectacular ‘Sunrise’) and a variety of other orchestral scores; two piano concertos; chamber music; songs (with piano and with orchestra); two operas, and (early in his career) cantatas and choral works. His orchestration of Mussorgsky’s piano suite Pictures at an Exhibition has become the best-known version of the work. Hispanic and ‘exotic’ cultures hold a significant place in his output.

Ravel’s music matches craftsmanship, structure and finesse with often striking sensual beauty, and it frequently balances sincerity with irony and wit with sentiment. His ear for instrumental colour was phenomenal and his orchestration often breathtaking.

Ravel’s 40-year career coincided with a period of exceptionally rich cultural activity and evolution. This is reflected in his music, which develops from late-Romanticism and so-called ‘impressionism’ to incorporate aspects of neo-classicism, jazz and Machine Age modernism. Bolero has been credited with looking forward to the minimalism of the late 20th century.

The Complete Works: A colourful panorama of landmark interpretations

Drawing on Warner Classics’ unrivalled catalogue, Ravel: The Complete Works features superlative interpretations by an array of outstanding musicians, including a number of today’s leading Erato and Warner Classics artists. The recordings in the collection span nearly a century of history.

Ravel’s quintessentially French musical character is reflected in the interpretations selected for the set, making it even more distinctive in the marketplace. The impressive list of performers includes a substantial number of French artists from several generations, while the artists from other countries are notable for their sensitivity to French style.

The covers will carry paintings by the French artist Albert Marquet (1875-1947), a ‘Fauvist’ friend of Matisse. The individual spirit and vivid colours of Marquet’s paintings mirror Ravel’s music

This box is an essential collector’s item

Ravel’s complete works in interpretations of acknowledged excellence and authority which capture the distinctively French spirit (‘esprit français’) of the composer’s art.

The British musicologist, an expert on French music whose biography of Ravel (Ravel, Yale University Press, 2011) rates as one of the best books written on the composer