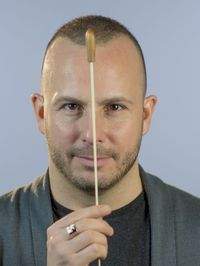 Yannick Nézet-Séguin was born in Montreal in 1975, and was mentored by Carlo Maria Giulini; at 25 he took up his first position as music director, with the Orchestre Métropolitain, and has maintained a close relationship with the orchestra throughout his career. He was announced as principal conductor of the Rotterdam Philharmonic Orchestra in 2006 (a position which he held until 2018), and took up the post of music director of the Philadelphia Orchestra in 2012.

Nézet-Séguin made his Metropolitan Opera debut with Carmen in 2009, and returned on a regular basis over the next few years; in 2016 it was announced that he would succeed James Levine as Music Director with effect from 2020, though eventually took up the position two years early in the wake of the termination of Levine’s contract in early 2018.

His many recordings include Bernstein’s Mass, The Rite of Spring, and two hugely successful Rachmaninov albums with pianist Daniil Trifonov (with the Philadelphia Orchestra), a Mozart opera series (all featuring tenor Rolando Villazón) with the Chamber Orchestra of Europe, Tchaikovsky’s Violin Concerto and Sixth Symphony, Strauss’s Ein Heldenleben and Four Last Songs, and Ravel’s Daphnis et Chloé (with the Rotterdam Philharmonic), and DVDs of Carmen, Gounod’s Faust, Dvořák’s Rusalka, and Verdi’s Otello from The Met.

Find out more at https://en.wikipedia.org/wiki/Yannick_Nézet-Séguin