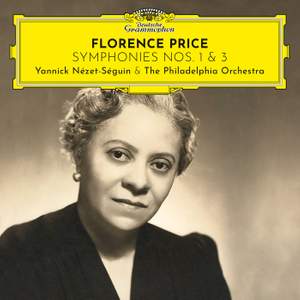 The Philadelphia polish helps to highlight one of Price’s most endearing qualities: those kaleidoscopic orchestrations, with piquant detailing from all corners, including celesta and slide whistle...... — BBC Music Magazine, Christmas 2021, 4 out of 5 stars More…

In 1933, Florence Price's 'Symphony No. 1' was the first symphonic work by a Black woman to be played by a major American orchestra. Steeped in American folk music, spirituals, and church hymns, Price's celebrated work reflects her experience as a Black woman raised in the post-Civil War South. Florence Price composed her 'Third Symphony' in the midst of the Chicago Renaissance and it reflects her growth as a composer, taking more risks, adding modern techniques, and expanding emotional elements as compared to her more traditional 'First Symphony'. The 2 symphonies, played by the Philadelphia Orchestra and conducted by Yannick Nézet-Séguin, were recorded in Verizon Hall at the Kimmel Center for the Performing Arts in Philadelphia in early 2021.

The Philadelphia polish helps to highlight one of Price’s most endearing qualities: those kaleidoscopic orchestrations, with piquant detailing from all corners, including celesta and slide whistle... there’s a special joy in hearing its wind and brass sections caressing the soulful melodies generously strewn through these symphonies from both ends of the 1930s.

Nézet-Séguin and his Philadelphia Orchestra are body and soul into the joy and resolve of this music. Price can only have dreamt of performances like these.

Price's Symphony No. 1 received its premiere recording from the Fort Smith Symphony a couple of years ago, but this first instalment in a projected Price series from Nézet-Séguin finds still more beauty in this remarkable, instantly appealing score thanks to the sheen and shimmer of the Philadelphia strings, some delectable woodwind solos, and the sonorous glow which the brass bring to the chorale-like writing in the Largo.