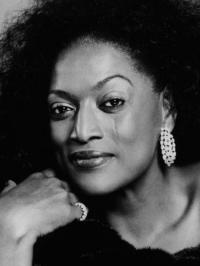 Born into a family of amateur musicians in Augusta (GA) in 1945, Norman sang from early childhood, going on to train at Howard University Washington, Baltimore’s Peabody Conservatory and the Interlochen Center for the Arts in Michigan. On relocating to Germany after completing her studies, her career hit the ground running when she made her professional opera debut at the Deutsche Oper in Berlin as Elisabeth in Tannhäuser in 1969; heavyweight German repertoire would play a central role in her operatic career.

An imposing, statuesque figure (she stood at just over 6 foot), she commanded the stage with an easy authority and excelled as mythical, regal heroines such as Gluck’s Alceste, Strauss’s Ariadne and Berlioz’s doomed prophetess Cassandre. Though commonly described as a dramatic soprano, Norman truly was a singer whose voice defied categorisation – the thrilling power of her upper register was matched by an opulent middle and chest-voice which enabled her to take on zwischenfach and mezzo repertoire,. Including Mahler's Das Lied von der Erde and the mezzo parts in Beethoven’s Missa solemnis and Verdi’s Requiem.

Thanks to her flamboyant glamour, social activism and sheer charisma as well as her magnificent voice, Norman’s popularity extended far beyond the opera world, and she was frequently chosen to perform at high-profile events such the second inaugurations of Ronald Reagan and Bill Clinton, the opening ceremony at the 1996 Olympics in Atlanta, the unveiling of a memorial commemorating the victims of 9/11 at the World Trade Center in 2002, and (perhaps most spectacularly) the bicentenary of the French Revolution on Bastille Day 1989, for which she emerged from a monument on the Place de la Concorde swathed in a giant tricolor to sing La Marseillaise.

Norman died in hospital in Manhattan on 30th September 2019 following long-term complications from a spinal injury sustained in 2015. She was 74.

Find out more at https://en.wikipedia.org/wiki/Jessye_Norman

The magnificent American soprano, widely recognised as one of the great Strauss and Wagner singers of the late twentieth century, has died aged 74.