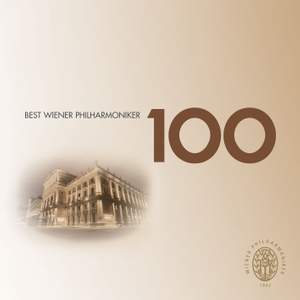 Borodin: Symphony No. 2 in B minor: III. Andante

Dance of the Young Maidens

VI: Entrance of the Emperor and his Court

Entr'acte No.3 in B flat

Mendelssohn: Symphony No.4 in A Op.90 'Italian': IV Saltarello: Presto

This 6CD set contains 100 tracks from the finest EMI recordings of the famous Wiener Philharmoniker, know in English as the Vienna Philharmonic Orchestra, under some of the world’s greatest conductors including Wilhelm Furtwängler, Herbert von Karajan, Rudolf Kempe, André Cluytens, Riccardo Muti and many others.

THE STRAUSS FAMILY contains some of the best-known waltzes and polkas by the inimitable Viennese composer Johann Strauss II and other members of his family. Among the waltzes are Wiener Blut (‘Vienna Blood’), Wein, Weib und Gesang (‘Wine, Women and Song’), G’schichten aus dem Wienerwald (‘Tales from the Vienna Woods’) and An der schönen, blauen Donau (‘The Blue Danube’) that was used so effectively in the film 2001: A Space Odyssey. All the works included here have been heard at the famous New Year’s Day concerts given by the Wiener Philharmoniker, which traditionally concludes with the Radetzky March, performed here live at the New Year’s Day Concert of 2000 conducted by Riccardo Muti.

The Wiener Philharmoniker is drawn from the permanent orchestra of the Vienna State Opera and this programme called AT THE THEATRE covers orchestral pieces from the operatic repertoire. It begins with Mozart’s lively overture to Le nozze di Figaro and includes among others the overtures to Il barbiere di Siviglia by Rossini, The Bartered Bride by Smetana and Hänsel und Gretel by Humperdinck. Also heard are the Waltz from Act II of Gounod’s Faust, the spirited ‘Dance of the Hours’ from Ponchielli’s La Gioconda, immortalised in Walt Disney’s original Fantasia film, and the stirring Triumphal Scene from Verdi’s Aida.

As its name implies, IN RUSSIA is a programme of memorable works by Russian composers. Tchaikovsky, the doyen of Russian composers, is represented by the famous ‘pizzicato’ movement from his Fourth Symphony and the Theme and Variations from his orchestral Suite No.3 in G. Borodin provides a section of his Polovtsian Dances and the Andante movement from his Second Symphony. More recent compositions include the Suite from Prokofiev’s Love for Three Oranges and extracts from Shostakovich’s Chamber Symphony and his Symphony No. 5 in D minor. The disc ends with three items from Khachaturian’s colourful ballet Gayaneh, finishing with the spectacular ‘Sabre Dance’.

ON HOLIDAY takes its name from a famous LP on which most of these pieces were originally released. The composers come from all over the world – Smetana and Dvorák from Czechoslovakia, Kodály and Lehár from Hungary, Sibelius from Finland, Ravel from France and Vivaldi from Italy – and one can imagine the Wiener Philharmoniker holidaying in all those different countries and performing some of the music by the local composers while they are there.

CLASSICAL MASTERS brings together a programme by the greatest Austrian and German composers from the Classical period, beginning with a movement from Haydn’s ‘Surprise’ Symphony, followed by extracts from Mozart’s ‘Haffner’ and ‘Linz’ Symphonies and his much-loved Eine kleine Nachtmusik. Popular works by Schubert and Mendelssohn follow, and the disc ends with a group of items by perhaps the greatest Classical master of all – Ludwig van Beethoven.

The last CD, called VIENNESE HERITAGE, covers a group of composers who had special associations with Vienna, most notably Brahms, Bruckner and Mahler. It opens with Wagner’s stirring overture to Tannhäuser before moving to the three main composers mentioned above. It also includes part of Richard Srauss’s colourful tone poem Don Juan and concludes with the jubilant Academic Festival Overture by Johannes Brahms.