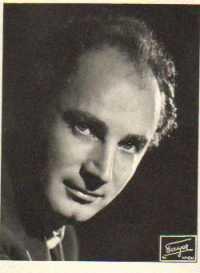 Died: 11th August 1996, Kastanienbaum, in the Canton of Lucerne, Switzerland

In 1939 Rafael Kubelík became music director of the Brno Opera until the Nazis shut it down on November 12, 1941. He continued to work with the Czech Philharmonic Orchestra, which the Nazis allowed to continue operating, becoming its principal conductor. (He had first conducted the Czech Philharmonic in 1934 when he was 20 years old.) In 1944, after various incidents, including one in which he declined to greet the Nazi Reich-Protector with a Hitler salute - along with his refusal to conduct Wagner during the War - Kubelik "deemed it advisable to disappear from Prague and to spend a few months undercover in the countryside so as not to fall into the clutches of the SS or Gestapo" (Albert Scharf, in Rafael Kubelik: His Life and Achievement, p. 114).

Kubelik conducted the orchestra's first post-war concert in May, 1945. In 1946, he helped found the "Prague Spring" Festival, and conducted its opening concert. But after the Communist coup of February 1948, Kubelik left Czechoslovakia, vowing not to return until the country was liberated. "I had lived through one form of bestial tyranny, Nazism," he told an interviewer, "As a matter of principle I was not going to live through another."

Find out more at https://en.wikipedia.org/wiki/Rafael_Kubelík