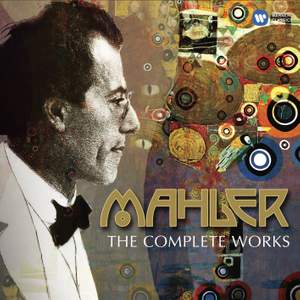 Recording of the Week,  Gustav Mahler

In the last half of the 20th century Gustav Mahler came to hold a dominant position in the consciousness of musicians and audiences. Though he died in 1911, he captures the anxieties and aspirations of the modern age in symphonies and songs which, while utterly personal in expression, strike a universal chord. These critically acclaimed recordings, made between 1949 and 2010, feature some of the greatest Mahler conductors, singers and orchestras. With three songs newly recorded by Ian Bostridge and Antonio Pappano, this set offers a complete portrait of a man who speaks to us now as urgently as he has ever done.

Gustav Mahler was born on 7th July 1860 in Kalischt (now Kalište), a small village in the Royal Province of Bohemia, then part of the Austrian Empire, the second child of a Jewish family; seven of their fourteen children died in infancy. His childhood was spent in the local town of Iglau (now Jihlava) where the family had moved not long after his birth. Noticing his talent early his parent arranged piano lessons when he was six. It cannot be said that his was a happy childhood as his father, who had persuaded his parents-in-law to force their daughter to marry him, vented his anger against her for all the actual and perceived wrongs done during his attempts to improve his life.

Mahler later summed up his family’s plight thus: I am thrice homeless, as a native of Bohemia in Austria, as an Austrian among Germans, and as a Jew throughout all the world. Everywhere an intruder, never welcomed.

At 15 Mahler was admitted to the Vienna Conservatoire to study harmony and composition as well as piano; three years later Mahler attended Anton Bruckner’s lectures at Vienna University. It was during this period that the two works which survive from his teenage compositions were written: The movement for Piano Quartet (1876?-1878?) and Das klagende Lied which was submitted for a competition in 1880 where the jury was led by Brahms, but failed to win a prize. Over the next few years he revised the latter work and wrote a number of songs but he was obtaining more work as a conductor and at successively larger opera houses. In Leipzig he made such a success with parts of Der Ring des Nibelungen when Arthur Nikisch fell ill that both critics and public alike sang his praises. He became music director of the opera in Budapest for three years in 1888, the following year the city hosted the premiere of his first symphony, then in five movements. Hamburg was next to secure his services from 1891 to 1897 during which time he revised the first, wrote the second and sketched the third symphony. These three together with the fourth are sometimes referred to as the “Wunderhorn” symphonies owing to their use of or containing influences of the songs which appear in Des Knaben Wunderhorn (The Youth’s Magic Horn).

He was then offered the most prestigious post in music in the Austrian Empire, that of Director of the Vienna State Opera. Mahler, who had never been a devout Jew, converted to Roman Catholicism in preparation for the appointment. He had sung in a Catholic choir as a boy and would set the hymn Veni Creator Spiritus as the first part of his eighth symphony.

In March 1902 he had married Alma Schindler, twenty years his younger, and she gave birth to two daughters. His work at this time was spent on three symphonies and songs set to poems by Friedrich Rückert. It was alas all too prophetic to compose songs on deaths of children, Kindertotenlieder, when you have two young children as his first daughter died of diphtheria at the age of four – thought to be represented by the first of two hammer-blows in the last movement of his sixth and most bleakly tragic symphony. The songs are bound up musically with these symphonies especially the fifth which contains the famous Adagietto. The second hammer-blow is thought to refer either the diagnosis of his heart disease or his resignation from the opera caused by obstinacy in artistic matters leading to increasingly nasty anti-semitic attacks; there was a third – for his own death? – but this was removed in the revisions. He needed to get away from Europe and luckily a generous offer from the Metropolitan Opera gave him the 1908 season in America, but then he was replaced by Toscanini. Back in Europe his marriage was collapsing owing to Alma’s infidelity. These were the days of the completion of Das Lied von der Erde and the ninth symphony but such was Mahler’s fixation of the ninth (Beethoven’s last symphony – also for Bruckner and Dvorák) that he regarded Das Lied as a symphony with voices and therefore the next one would be the tenth! He began yet another one but left it incomplete and performing versions have been written by various composers.

Some people criticise Mahler for being so preoccupied by death but, in reality, he was really full of life. His symphonies should, he said, “take in the whole world”. It cannot be denied that the music he wrote for the “final departure” is so achingly beautiful and heartfelt that one should just listen and be moved, hopefully, to tears as he no doubt was as he penned the final notes. According to Alma his last word was “Mozartl” (a diminutive, corresponding to ‘dear little Mozart’); he is buried in Grinzing Cemetery outside Vienna.

Mahler’s influences on subsequent generations have been extensive and wide – Zemlinsky, Schönberg, Berg and Webern in Austria, Shostakovitch in Russia, Britten in Britain and Copland in America are just a few to acknowledge their debt. He also spread beyond the limits of classical music with Paul McCartney writing “I have always adored Mahler, and Mahler was a major influence on the music of The Beatles. John and me used to sit and do the Kindertotenlieder and Wunderhorn for hours, we’d take turns singing and playing the piano. We thought Mahler was great.”