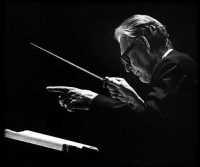 Otto Klemperer (May 14, 1885 – July 6, 1973) was a German-born conductor and composer. (He took United States citizenship in 1937 and Israeli citizenship in 1970.) He is widely regarded as one of the greatest conductors of the 20th century.

Above all, his fame rests on his interpretations of Germanic repertoire, of which he generally gave austere and grand performances (whether live or on record), in later years often with notoriously slow tempi.