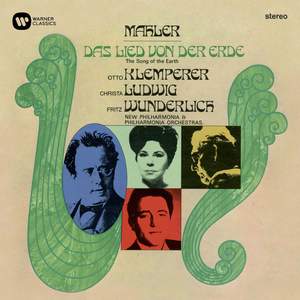 Not only did Otto Klemperer know Mahler personally, he had reason to be grateful to the composer, who helped him in the early stages of his career. Klemperer first conducted Das Lied von der Erde in 1924 and this recording dates from some 40 years later. Few tenors have rivalled Fritz Wunderlich’s glowing heroic lyricism, while Christa Ludwig, both opulent of tone and acutely sensitive, makes the final ‘Abschied’ an unforgettable experience.

Ludwig recorded Mahler’s great ‘symphony for alto, tenor and orchestra’ several times (including for Bernstein and Karajan), but I always find myself returning to this 1964 Klemperer account for its space and clarity (and the freshness of Ludwig’s singing) in Der Abschied in particular.