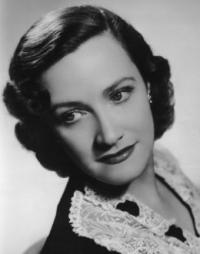 One of the most beloved singers of the mid-twentieth century, Kathleen Ferrier was born in Lancashire in 1912 and worked as a telephonist for the GPO whilst performing regularly as an amateur pianist at local music festivals and competitions. She took up singing at the relatively late age of 25, studying first with JE Hutchinson and later with Roy Henderson (whose pupils also included the soprano Jennifer Vyvyan and the contralto Norma Procter). Her career took off following an introduction to Sir Malcolm Sargent, with whom she would later work on a regular basis; early successes included Handel’s Messiah at Westminster Abbey and The Angel in Elgar’s Dream of Gerontius in Leeds, and by the mid-1940s she was signed to Decca Records.

Ferrier excelled in oratorio and song-repertoire (not a natural actress, she took on comparatively few operatic roles, but created the title-role in Britten’s The Rape of Lucretia at Glyndebourne in 1946 and won considerable acclaim for Gluck’s Orfeo at the same house the following year); her recordings of folk-songs such as ‘Blow the wind southerly’ and ‘Down by the Salley Gardens’, the arias from Bach’s Passions and Christmas Oratorio, and especially Mahler’s orchestral songs and Das Lied von der Erdewith Bruno Walter and the Wiener Philharmoniker have achieved legendary status.

Ferrier was diagnosed with breast cancer in 1951, just as her career was reaching its peak; she continued to perform whilst receiving treatment (despite almost collapsing during a performance of Orfeo in the final months of her life), but died aged just 41 on 8th October 1953. Her honours and awards included a CBE and Gold Medal of the Royal Philharmonic Society; the Kathleen Ferrier Award (which first took place in 1956, and grew out of the Kathleen Ferrier Memorial Scholarship Fund, set up to support young singers) remains one of the most prestigious annual singing-competitions in the classical world.

Find out more at https://en.wikipedia.org/wiki/Kathleen_Ferrier

Recording of the Week,  Kathleen Ferrier

On the centenary of Ferrier’s birth, Katherine pays to tribute to the great Lancashire contralto and explores her legacy on disc via two comprehensive commemorative sets from Decca and EMI, which includes folksongs, Bach and Mahler.