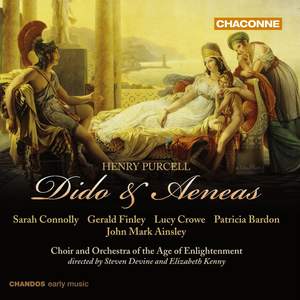 Choir & Orchestra of the Age of Enlightenment, Steven Devine and Elizabeth...

This new Dido… enshrines Connolly as one of the most affecting Carthaginian Queens since Janet Baker's account nearly half a century ago. From the outset, Connolly exudes imposing presence,... — BBC Music Magazine, February 2009, 4 out of 5 stars More…

Act I: Shake the cloud from off your brow (Belinda, Chorus)

Act I: Ah! Belinda, I am press'd with torment (Dido)

Act I: Whence could so much virtue spring? (Dido, Belinda, 2nd Woman, Chorus)

Act I: Cupid only throws the dart (Chorus)

Act I: If not for mine, for Empire's sake (Aeneas, Belinda)

Act I: To the hills and the vales (Chorus)

Act I: The Triumphing Dance

Act II: The Queen of Carthage, whom we hate (Sorceress, Chorus)

Act II: Thanks to these lonesome vales (Belinda, Chorus)

Act II: Groves' Dance: Then since our charms have sped (Chorus)

Act III: Our next motion (Sorceress)

Act III: Your counsel all is urg'd in vain (Dido, Belinda, Aeneas)

Recording of the Week,  Sarah Connolly gets Purcell year off to a flier

The British mezzo ushers in the 350th anniversary of Purcell’s birth by masterminding a new recording of Dido and Aeneas, on which her assumption of the title-role ranks with the very best on disc.

Chandos’ featured release is a new recording of the first English operatic masterpiece, Purcell’s tragedy Dido and Aeneas. Starring Sarah Connolly, Gerald Finley, with the Orchestra and Choir of the Age of Enlightenment, it is released to commemorate the 350th anniversary of Purcell’s birth.

Directed from the keyboard by Steven Devine and Elizabeth Kenny as in recent concert performances, the ensemble presents the opera in a version that incorporates other dance works by Purcell.

There have been two revolutions in scholarly thinking about Dido and Aeneas and both had serious implications for historically inclined performers, and demand a creative response today. The musicological backdrop to this recording results in a performance closer to the court entertainment of Purcell’s day, in which musical dramas evolved from the English theatre tradition.

Sarah Connolly, the quintessential Dido of the early twenty-first century, has been the driving force behind this recording. She writes of the project, ‘It seems I have known Purcell’s Dido all my life and feel able to express myself in this music like no other… As a character, Dido fascinates me to the point of obsession’.

Connolly has performed with the Orchestra of the Age of Enlightenment on many occasions, including two productions at Glyndebourne – Giulio Cesare and St Matthew Passion – as well as Dido and Aeneas at the Proms, the South Bank Centre and Tetbury Festival. One recent review of Connolly’s Dido had the following to say: ‘It was the sheer depth of emotion Connolly infused in her portrayal of Dido that was truly remarkable. Emotion flowed off the stage from the intensity in her voice and through her actions. Her final aria, one of the most beautiful in English baroque music, brought a tear to the eye in a hall so quiet you could hear a pin drop… a moving portrayal of this tragic heroine’ (MusicalCriticism.com).

This impressive performance by an extraordinary group of musicians makes for a significant addition to the catalogue.

Sarah Connolly and the Orchestra of the Age of Enlightenment will perform Dido and Aeneas at the Royal Opera House, Covent Garden in March 2009.

This new Dido… enshrines Connolly as one of the most affecting Carthaginian Queens since Janet Baker's account nearly half a century ago. From the outset, Connolly exudes imposing presence, pathos and unassailable dignity; her Act III Lament consummates a deeply-felt empathy with the role (honed not just in Purcell but also mindful of Berlioz's portrait in The Trojans). Gerald Finley's aristocratic Aeneas and Patricia Bardon's gimmick-free yet blood-chilling Sorceress are particularly impressive - though Bardon's sorority of witches sounds more house-trained than maliciously feral, while the playing of the OAE for co-directors Elizabeth Kenny and Stephen Devine is ever-alert and full of flair.

A passionate and charismatic venture, the brainchild of Sarah Connolly, the Dido on this disc. Gerald Finley is stunning as a brave and silken-voiced Aeneas, and the continuo powerhouse of Kenny and Devine is awesome.

Sarah Connolly as Dido is magnificent; from her opening ''Ah, Belinda'', she presents a queen emotionally removed from her surroundings, a subdued loner, predicting disaster even amidst present happiness...This truly feels like the 'Dido' for the 21st century.

Lucy Crowe's Belinda is a splendid foil for Connolly's self-absorption, with her astute and increasingly desperate buoying up. The Sorceress of Patricia Bardon oozes class with an implacable display of vocal authority over cheap cliché, joined by two witches who gossip like a couple of housewives in the launderette. And then there's that single-tracked Aeneas, whom Purcell gives nothing of great moment. Gerald Finley parades the conventional Trojan Prince with generic regret and a smattering of hubris.
The textural lightness of the OAE, for whom a certain emotional reserve ultimately appears all the more powerful, is another feature of this excellent recording, as is the outstandingly deft co-direction of Elizabeth Kenny and Steven Devine.

Here is England's first great opera presented with a truly cohesive sense of theatrical purpose… Sarah Connolly is the driving force from the start… a supremely wide-ranging, tragic and experienced queen… inhabiting the shadows of "Ah! Belinda" with early signs of deplorable fate... the Lament... Connolly lives it with exactly the right blend of pre-conceived nobility and gut-wrenching sadness, simply confirming it as one of the musical high-points of the 17th century.

Connolly's characterization is deeply moving, with fine tonal contrasts in Dido's Lament. Gerald Finley too makes the most of the limited role of Aeneas with highly expressive singing...First-rate recording, finely balanced to an apt scale.

it is hard to imagine a better Dido than Sarah Connolly. The role suits her voice perfectly, and with her clear diction, tasteful ornamentation and technical precision it is executed perfectly as well. But what comes across even more powerfully than all this is her understanding of the part...The rest of the cast is equally outstanding.

The great singing comes from Patricia Bardon's lethal Sorceress and Gerald Finley's sincere, subtly anguished Aeneas. The playing, from the Orchestra of the Age of Enlightenment, co-directed by harpsichordist Steven Devine and guitarist Elizabeth Kenny, is exquisite.

[Connolly's] Queen is not merely stately and regal...is surprisingly real, utterly human, vulnerable and devastated by her perceived rejection...Finley is an ideal Aeneas...making more of his character than one usually encounters, with virility underscoring his interpretation...It is the disc of the year and should be chosen over its eminent predecessors, if only for Connolly’s majestic, yet all too human Dido.