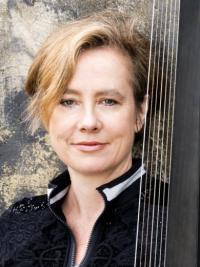 The English lutenist and theorbo-player Elizabeth Kenny studied with Nigel North and works regularly with groups such as Les Arts Florissants, the Orchestra of the Age of Enlightenment and Phantasm as well as maintaining a busy solo career. In 2007 she founded Theatre of the Ayre, with whom she has recorded John Blow’s Venus and Adonis and The Masque of Moments, their debut recording on Linn, which was described as ‘full of flair and improvisatory spirit’ by BBC Music Magazine.

Kenny’s discography also includes a Grammy and ECHO Klassik Award-winning recital of Shakespeare Songs with Ian Bostridge on Warner Classics, William Lawes Royall Consorts with Phantasm (which was nominated for both a Gramophone Award and a BBC Music Magazine Award in 2017), recitals with Carolyn Sampson, Mark Padmore, Robin Blaze and Andreas Scholl, and the solo album Ars longa (released 2019) which presents world premiere recordings of works by Nico Muhly and Benjamin Oliver alongside music by Kapsberger, Piccinini, and de Visée.

Alongside her performing career, Kenny has held academic positions at the universities of Oxford and Southampton, the Universität der Künste Berlin, and the Royal Academy of Music in London.

The theorbo-player and lutenist talks to David about her solo album Ars longa, released on Linn last month, which includes music by Kapsberger, Piccinini and Robert de Visée as well as new commissions from Benjamin Oliver and Nico Muhly.