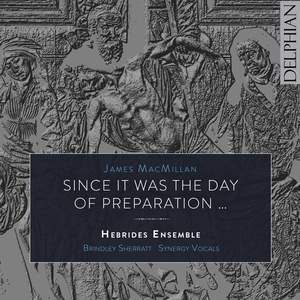 Since it was the day of preparation is on the face of it a chamber piece, with just ten performers needed. Yet in an extraordinarily perceptive and affecting manner it broaches enduring universal... — BBC Music Magazine, July 2016, 5 out of 5 stars More…

Part I: The Pierced Christ (Tenor)

Part I: The Burial (Baritone)

Recording of the Week,  James MacMillan's new work on the Resurrection

David listens to James MacMillan's new work on the Resurrection, with the Hebrides Ensemble and Brindley Sherratt.

Interview,  James Macmillan on 'Since it was the day of preparation…'

David talks to the composer about his new setting of the story of the Resurrection, out on Friday on Delphian.

The first disc in a new recording partnership between Hebrides Ensemble and Delphian Records presents Sir James MacMillan's extraordinary setting - by turns intimate and dramatic - of the Resurrection story as told in St John's Gospel. As at the work's premiere at the 2012 Edinburgh International Festival, the Ensemble and its director William Conway (the work's dedicatee) are joined by bass Brindley Sherratt in the role of Christ, and by a quartet of

singers from Synergy Vocals. A significant landmark in MacMillan's career, Since it was the day of Preparation … now inaugurates a series of recordings set to document Hebrides Ensemble's outstanding contribution to Scottish cultural life.

Since it was the day of preparation is on the face of it a chamber piece, with just ten performers needed. Yet in an extraordinarily perceptive and affecting manner it broaches enduring universal issues and, in this wonderfully committed recording, already feels like a modern masterpiece.

Here we have the latest in a stream of major works which express [MacMillan’s] deeply held Catholicism, and for my money it is by far and away the most effective...The Hebrides Ensemble provide eloquent testimony to the sustained impact of MacMillan’s writing.

Sherratt is very fine as Christ. The music he has to sing is dignified and eloquent and Sherratt puts it across with great conviction...No less impressive are the four members of Synergy Vocals, whether singing as a consort or individually. All four voices are clear, both in terms of tone and diction; they are ideally suited to the music.

the writing is always idiomatic and shows the players’ abilities off well...[The vocalists] sing in a style that seems natural and eternal when one hears it, despite being completely new – a fusion of Gregorian chant and MacMillan’s Scottish-inflected, ornamented idiom...This is an incredible piece, and I firmly believe it’s destined to become one of MacMillan’s most-performed works.

MacMillan’s boldly intimate setting of the post-crucifixion narrative of St John’s Gospel veers from Schütz-like austerity to lush piety. Some of the finest music comes in the instrumental interludes...Excellent performances throughout.

One is left wondering how such modest musical resources have achieved such significant impact on the listener. It's as though MacMillan captured the essence of sanctity in his conception where the apparently unassuming has a significant impact... thoroughly recommended.

Macmillan's work is a musically entertaining, dramatically satisfying piece of theatre, not a dull slab of dutiful contemplation... this is as authoritative a reading as we're ever likely to hear.

extraordinary and surprisingly intimate...Macmillan somehow manages to blend the feel of plainchant with his own kind of Celtic ornamentation. It's lean, spare, intimate, startingly beautiful, and with an atmosphere that stays with you after the final quintet froom Hebrides Ensemble has drifted out of reach.