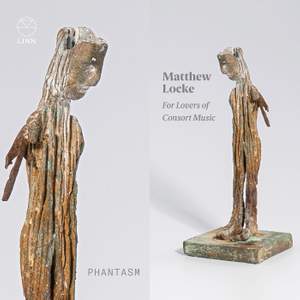 Locke: The Flat Consort for My Cousin Kemble, Suite No. 1 in C Minor

Locke: Consort of Four Parts, Suite No. 3 in F Major

Locke: Consort of Four Parts, Suite No. 1 in D Minor

Locke: Consort of Four Parts, Suite No. 6 in G Major

Locke: Consort of Four Parts, Suite No. 5 in G Minor

Locke: Consort of Four Parts, Suite No. 4 in F Major

Locke: The Flat Consort for My Cousin Kemble, Suite No. 2 in B-Flat Major in B Flat Major

Phantasm adds to its critically-acclaimed repertory of English viol consort music with the first recording in what will be a series exploring the music of Matthew Locke.

• A turbulent musical personality, Locke has much to endear him to ‘lovers of consort music’; his ceaseless and obsessive quest for variety ensures music of maximum breadth and diversity.

• Director Laurence Dreyfus has created an intriguing programme that showcases Locke’s rule-bending approach featuring music that is in turn quirky and humorous, lyrical and sweet.

• Most excitingly, this release reunites the partnership of Phantasm and lutenist Elizabeth Kenny, whose last album together, Dowland: Lachrimae or Seven Tears, won both a Gramophone Award and a Diapason d’Or de l’Année.

• Locke’s part-writing, and the oftentimes orchestral dimension of his approach, are both highlighted by the opulent realization of the continuo part, devised here with supreme inventive powers by Kenny

“The result is a textural transparency and clarity that allows the ear to penetrate right through even five-part textures, bringing out the contrapuntal detail of Locke’s consorts in all their angular unlikeliness.” The Arts Desk

Locke disturbs with jagged, angular lines, wayward chromatic harmonies, and murky colours plumbing the consort’s depths; there, he delights with fleet, balletic rhythms, filmy textures, and lyrical melodies…One of Phantasm’s most distinctive qualities is its airy (phantasmal?) sound. With weightless bowing and wispy articulation, Locke’s dance music floats and contrapuntal threads are woven into a fabric sheer as gossamer.

Locke’s music…is surprisingly tuneful and harmonically engaging. Phantasm’s performances are compelling, their immaculate ensemble always internally balanced to best effect, their near miraculous transparent textures brilliantly captured by the engineer…It is recordings of this calibre that will attract new listeners to the English consort repertoire.

In knotty times Locke wrote knotty music, with jagged edges and angular harmonies. The Birtwistle of his time? Not quite, for there’s always some lurking sweetness too, reflected in the golden tones of Dreyfus’s team, superbly recorded by Philip Hobbs. This week, then, we have one violinist sounding like a quartet and seven string players exerting their differences while being joined at the hip. It’s the best of both worlds.