One of the world's foremost lutenists, Elizabeth Kenny has a wide and varied discography both in collaboration with other early music ensembles (Phantasm, Gallicantus and her own Theatre of the Ayre) and as a solo artist. She's no stranger to contemporary music, either, forming part of the instrumental ensemble for James MacMillan's recent Resurrection-themed work Since it was the day of Preparation... - and indeed a movement from this striking composition appears on her latest album, Ars longa, in which she explores the traditional theorbo repertoire alongside three contemporary works for what's often seen as a quintessentially "early" instrument.

I spoke to Elizabeth about the different strands that come together in this album, and about the breadth and variety of writing for the theorbo both then and now.

You outline in the notes to this recording how the theorbo was invented as part of the Renaissance’s desire to recapture the spirit of Ancient Greece – here, by resurrecting the kithara. Was there much push-back from contemporary musicians against this new-fangled contraption?

It’s a nice idea to think of them reacting that way, but for various reasons this doesn’t seem to have been the case! This was partly because the lute was so inherently unstable as an instrument that all sorts of weird and wonderful shapes and sizes were coming out and constantly being modified. But also, it coincided with people wanting to write that kind of music anyway, so it wasn’t like it was intruding on something established: it was just perfect for things like Monteverdi’s Orfeo, with the idea of the bass-line accompanying the monody. The sense was less “what’s this new instrument doing here?” and more “this solves our problem” - the problem being the need to have a clearer bass-line in that kind of music.

Did the theorbo evolve much during its heyday, or did its form stay fairly fixed once the luthiers had settled on a design?

Yes – in fact, once you get into it it’s rather like the question of how many angels can dance on the head of a pin. The word “theorbo” ultimately just meant adding an extra neck; how long that neck could be, and how many strings were on it, were questions that were a little up for grabs. The one that I’m playing on this recording is an Italian-style instrument, which a lot of the solo music was written for, but then there were regional variants: in Germany they had a slightly different tuning, in England a different one again, and the shapes and sizes varied quite considerably. However, the “classic” theorbo, if you like, is the big Roman-Venetian instrument, and that seems to have been relatively settled in its tuning until about the beginning of the eighteenth century. Once you get into the Bach and Corelli sound-world they begin to sound a bit archaic, and you get things like archlutes and mandoras picking up the slack.

Is there any parallel with the way different harpsichord makers produced different kinds of instruments with different stops, and individuals influencing its evolution?

Annoyingly, there’s no straight answer. It’s partly individuals and partly national trends; there were luthiers like the Buchenberg family and Matteo Sellas in Venice and Rome, who were definitely the most sought-after makers. And there were manufacturers in France, too, doing slightly different things and generally making slightly smaller instruments. I go for as big as I can for the sound, but need to be able to be fit it on an aeroplane.

Today there are different types of revived theorbo around - people like me fell in love with the recordings we heard in the ‘80s and ‘90s by people like Nigel North and just thought we wanted one like that, but even so there’s still quite a lot of variety, which actually makes borrowing them a bit problematic! Harpists, for example, often find an instrument to borrow when they travel, but it’s difficult to do that with the theorbo because you literally don’t know what you’re going to see until it’s right there in front of you. British players are known in Europe for playing the larger kind of theorbo: when I play in France and Germany they can always tell where I’m from because I have this great long case for my instrument, whereas they tend to play much smaller models there.

I did a research project investigating English music of this time; the theorbo then was double-strung and more like a lute, so I thought I should get one of those as well; it’s a little quieter and less robust in terms of staying in tune, so I tend to only use it when I’m in charge, because I can build it into the programme in a way that plays to its strengths rather than its weaknesses.

The “old” works on this album fall into three camps – Italian, German and French. Would you say there were distinct national schools of lute-playing?

Yes, though in fact I’m guilty of raising a slight red herring with the German name here: Kapsperger just happened to be German by family, but grew up and worked in Rome. Both he and Piccinini are very typical of the Italian school –employing lots of chromaticism and quite thick chordal writing, and making use of the re-entrant tuning to break the rules a bit with chromatic techniques that weren’t available with other tunings. The French school is a total contrast, which is why I enjoy playing it so much – it’s quite incredible that the same instrument can sound so radically different. The basic model is a lovely tune with a bass line, based on dance forms, so as soon as you hear a bar of that you’ll know it’s French. The differences between the instruments are almost less important than the differences in those national styles.

England, by contrast, is different again. There’s very little music by actual English players; it’s a bit of a puzzle. A lot of it was either improvised or otherwise not written down, and to a large extent they played Italian and French music, but there is undeniably a big black hole suddenly after all that Elizabethan English stuff. There were a lot more lute and theorbo players being employed than ever before, so the absence of the music is a bit of a mismatch; that’s what led me to start asking, 'Well, what were they all playing?'. People like William and Henry Lawes played the theorbo, and they may have had an Italian instrument, but more likely one of these lute-like ones.

Without wanting to get too overtly political, I adore the fact that the English culture embraced the Italian sound wholeheartedly: you had players like Angelo Notari, an immigrant into Jacobean London, and the music that survives from him (and from people like Walter Porter) is basically so Italian that it could be Monteverdi or Caccini. They really went for it, but then at the same time, the same people in the same court circles decided that they wanted to extend the old English lute tradition, so you get these English theorboes which are basically like big lutes – associated with people like Thomas Mace, for instance - and that style’s more focused towards improvisation. What I love about all of this is that they clearly concluded that “being English” meant whatever you felt like at the time – if you were in a French mood you’d be English in a French way, and if you were in an Italian mood you’d be English in an Italian way. We didn’t have this very defensive monolithic culture, and it's very much a case of them absorbing what’s going on the Continent and welcoming it; I sometimes go on about this to audiences at some length, because it seems quite important at the moment for some reason..!

Can you tell us a bit about how these three commissions came to be?

It’s almost embarrassingly simple in some ways! To be involved in the MacMillan overall programme with the Hebrides Consort was a fantastic privilege, but quite a mad idea for me at the time, because I’d left that behind from when I played classical guitar many years ago. I was sucked into it by their amazing cellist, Will Conway, who convinced me that it would be fun and got me over my own reservations about being out of my comfort-zone. Those guys eat new music for breakfast every morning, and I just kind of tagged along. It was clear that James had a very clear function in mind for inserting an old instrument among modern ones; he wanted that two-worlds-colliding sort of feeling. It was also James who incited the Ben Oliver commission; I went up to his festival, the Cumnock Tryst, and he said maybe I could commission someone else, as the point of the festival is to generate new music. Ben was a friend and colleague at Southampton, and often he will weave in bits of jazz with bits of old music – clearly a lot of younger composers have this very eclectic taste, and I thought that could be very interesting, so he very kindly wrote this for me.

With Nico Muhly it was similar; I was doing a concert with Fretwork in New York and he’d written a piece for them, which I thought was absolutely wonderful, and we met up and discussed it. He mentioned that he was writing a piece for Thomas Dunford and Iestyn Davies, Old Bones (based around the rediscovery, exhumation and re-burial of Richard III), so I kept an ear out for that. Meanwhile I completed my Muhly education by listening to everything else he’d done, and it was incredibly exciting – so I just took a punt and asked him if he fancied writing something for the theorbo. It’s a very big ask for a composer, not only having a plucked instrument (which as Julian Bream has pointed out is a particular conundrum for people who are more keyboard- or string- or voice-based), but in addition it’s got the peculiarities of an old instrument, so even if you’re a good guitar composer you won’t necessarily get where the resonances are.

We had a session where I played Nico bits of my favourite tunes, and he played them back to me transposed and inverted, and engaged creatively with it in such a vivid way. We honed the piece a bit in Skype sessions, since New York is quite far from Salisbury where I live, and that whole process was incredibly instructive for me – things that I had thought wouldn’t work turned out to work beautifully once I’d done a bit of practice and got out of my habits. I’d been immersed in old music for twenty-five years, so the question was where I could go to extend my own sonic possibilities. That’s been wonderful with all three composers; they’ve kind of kicked me into different sound-worlds that they’ve created as a result of hearing the instrument. I don’t know how far I’ll go with this, but I’m enjoying myself massively at the moment! 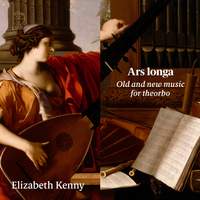 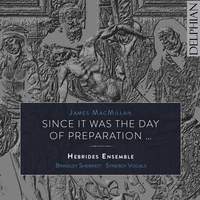 Since it was the day of preparation…, which features Elizabeth Kenny on the lute (and an extract from which appears on Ars longa), was released on Delphian Records in 2016.