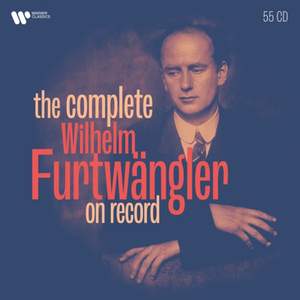 Furtwängler: Symphony No. 2 in E minor

Wilhelm Furtwängler is a musical titan, one of the greatest conductors of the 20th century. Some would say he is the greatest of all. A supreme, inimitable interpreter of the Austro-German symphonic repertoire, and of Wagner’s music dramas, he remains a towering point of reference for performers and audiences.

The unparalleled scope of this 55CD set makes it an essential for the music-lover. Not only is it the first collection to unite Furtwängler’s entire catalogue of studio recordings, it also encompasses every live recording he made with a view to commercial release. Painstaking research has even unearthed a treasury of previously unpublished material, recorded in Vienna and Copenhagen. The highest artistic and technical standards have been applied in curating this set: each recording has been fully and scrupulously remastered in high definition, while the accompanying commentary and documentation, both authoritative and exhaustive, further illuminates Furtwängler’s philosophy and his genius for bringing a score to life with apparent spontaneity.