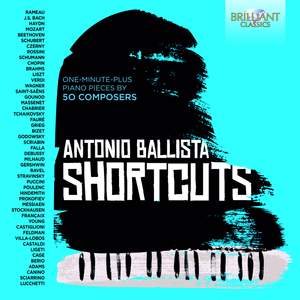 No. 11, Alt-Wien, 'Whose yesterdays look backwards with a smile through tears'

Mouvement perpetuel No. 1 in C Major

Prokofiev: Two Pieces from The Love of Three Oranges, Op. 33b

A special and intriguing concept: ultra-short (one minute plus) piano pieces by 50 composers, encompassing 3 centuries, starting with Rameau and ending with Sciarrino, Crumb, Ligeti and Berio. • Much can be said with few words, and so much can be expressed in a few notes; some composers struggled with large forms but could say a deep truth in one page.

Italian pianist Antonio Ballista colourful career includes the great classical repertoire, but he has also explored worlds such as those of ragtime, Italian and American popular songs, rock, and soundtrack music for the cinema. He has worked with Abbado, Bertini, Boulez, Brüggen, Chailly, Maderna and Muti, and played with orchestras such as BBC Symphony, the Concertgebouw, Israel Philharmonic, Filarmonica della Scala, Wiener Philharmoniker, l’Orchestre de Paris, Philadelphia Orchestra, London Symphony, and New York Philharmonic. Composers who wrote for him include Berio, Bussotti, Donatoni, Sciarrino and others