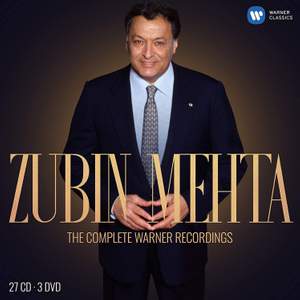 Since his early rise to international prominence, Zubin Mehta has exercised consummate mastery as a conductor in the concert hall, opera house and recording studio. Born in Mumbai and trained in Vienna, he has formed close relationships with the world’s leading orchestras and enjoyed notably lengthy tenures as Music Director of the New York Philharmonic and Israel Philharmonic. Both these ensembles make a substantial contribution to this collection of 27CDs and 3DVDs, as does violinist Itzhak Perlman, one of Mehta’s closest colleagues since the 1960s. The recordings, made between 1967 and 2000, encompass orchestral, choral, operatic and song repertoire of the 19th and 20th centuries.

Zubin Mehta, now 84, is one of the leading conductors of his generation: he is renowned for his exceptional baton technique, acute sense of form and structure, spontaneous and dynamic temperament.

He was born on 29 April 1936 in Bombay (now Mumbai) into a family of ancient Persian origin. His father, a violinist who spent a number of years playing with the Hallé under Barbirolli, had founded the Bombay Symphony Orchestra and gave him his first music lessons. Zubin began assisting him when he was a teenager and conducted the Bombay Symphony for the first time at sixteen.

In the early 1950s he completed his musical education at the Vienna Musikakademie under Hans Swarowsky. During his time in the Austrian capital, orchestral and operatic performances by Bruno Walter, Karl Böhm, Josef Krips and Herbert von Karajan made a huge impression on him. Later, in Italy, he also studied with Franco Ferrara, Carlo Zecchi and Alceo Galliera.

In addition, he has regularly been invited to conduct the world’s top orchestras: Berliner Philharmoniker, Wiener Philharmoniker, London Symphony Orchestra, London Philharmonic Orchestra … and he gained huge popularity as conductor of the Three Tenors concerts, broadcast worldwide from 1990.

Last year he retired from the Israel Philharmonic Orchestra after a productive 58-year relationship: 3320 concerts, including 1039 given on 106 tours over the time since his first concert with the IPO in May 1961! He was appointed its Musical Adviser in 1969, Principal Conductor in 1971, and Music Director for Life in 1981.

Though less voluminous than his Columbia-Sony discography, Mehta’s complete catalogue of Warner recordings represents a significant part of his recorded legacy: Sibelius’s Symphony No. 2 and Finlandia; Holst’s The Planets; a wonderful Gershwin anthology; Orff’s Carmina Burana; violin concertos with Itzhak Perlman (one of his best friends) and Maxim Vengerov (mentored by Mehta); a complete Aida (Nilsson, Bumbry, Corelli); a complete Tosca (Malfitano, Domingo, Raimondi), not to mention The Three Tenors in Concert 1994 which is a worldwide bestseller!

- Perlman in Russia: film of the tour