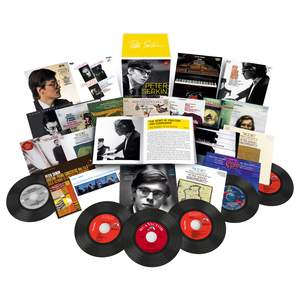 In everything from the Goldbergs to Takemitsu – taking in the Diabellis along the way – he illuminates music I should know better. The lucidity of his thought, translated to the keyboard with... — Gramophone Magazine, December 2020 More…

Goehr: …in real time I

His complete legacy on RCA and Columbia/Sony, released between 1965 and 1996, in a 35-CD collection with facsimile LP and CD sleeves and a booklet with an appreciation by Jed Distler and full discographical notes.

“Thank you so much for your interest in my old recordings and for being so enterprising and bringing them out in a box set now. When I first heard about this project I thought that some of those recordings are not good enough […].

I have listened to [them] over the weekend, and I’ve had a change of heart about it. Even the ones I would not play that way now still may have redeeming aspects, and some of them I actually enjoyed quite a lot. …” – Peter Serkin

Peter Serkin was closely involved in the preparation for this edition but sadly did not live to see its release. He died on February 1, 2020 at his home in Red Hook, N.Y.

In everything from the Goldbergs to Takemitsu – taking in the Diabellis along the way – he illuminates music I should know better. The lucidity of his thought, translated to the keyboard with refreshing directness by his ingers, invites me to meet him halfway.