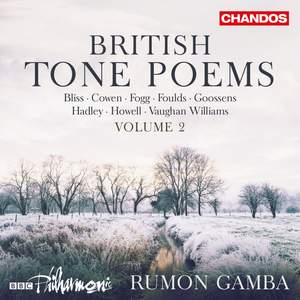 As a collection, the performance here surely go straight to the front of the field. Gamba and his Manchester orchestra launch the Foulds with a glistening, bright-eyed buoyancy…Gamba has an instinct... — Gramophone Magazine, Awards Issue 2019 More…

Chandos presents the eagerly anticipated second volume of Rumon Gamba’s fascinating survey of lesser-known British musical gems. This edition features works from composers including Sir Arthur Bliss, Patrick Hadley, Ralph Vaughan Williams, John Herbert Foulds, and more. British-born conductor Rumon Gamba held the positions of Principal Conductor and Music Director of NorrlandsOperan between 2008 and 2015 and Chief Conductor of the Aalborg Symfoniorkester between 2011 and 2015. He was also Chief Conductor and Music Director of Iceland Symphony Orchestra between 2002 and 2010. He regularly leads the BBC orchestras and has appeared at the BBC Proms on a number of occasions. This release includes two world premiere recordings.

As a collection, the performance here surely go straight to the front of the field. Gamba and his Manchester orchestra launch the Foulds with a glistening, bright-eyed buoyancy…Gamba has an instinct for pacing a work towards its natural climax…If I had a reservation it would be that so much of this music is so reflective…But can you really have too much of a good thing?

This excellent collection of British tone poems is a worthy successor to Vol. 1 in the series.

Not so much as a whiff of cowpat on this second volume of early twentieth-century rarities from Gamba & Co.: the stand-outs are Patrick Hadley’s brooding, atmospheric Kinder Scout (the Derbyshire peak’s craggy grandeur conjured up by some wonderfully evocative writing for cor anglais), Arthur Bliss’s Stravinskian Mêlée fantasque, and Dorothy Howell’s weird and wonderful Lamia, premiered at the Proms when the composer was just 21.

As the BBC Philharmonic’s fine performances demonstrate, [the Foulds, Fogg, Goossens and Cowell] are expertly written, unfailingly melodic scores, which never quite kindle the spark of originality that would make them truly memorable. The other three works here are much more striking, however. Dorothy Howell’s Lamia...seems a remarkable achievement for a 20-year-old composer, a neat synthesis of European and British influences.