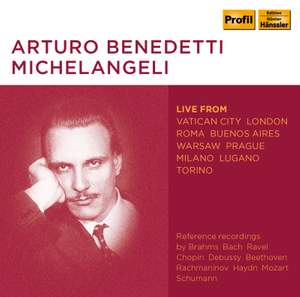 Brahms: Variations on a theme by Paganini in A minor, Op. 35: Book 1

III. Serenade for a Doll (Live)

IV. The Snow Is Dancing (Live)

Piano Sonata No. 5 in C Major

According to Joachim Kaiser in his book 'Grosse Pianisten unserer Zeit' (great pianists of our time), there is 'among all the pianists in the whole world not one who takes such pains to perform for the sheer beauty of the music as Arturo Benedetti Michelangeli'. The career of ABM, as he was known, was frequently interrupted due to ill health and can best be documented through his public performances, which also form the nucleus of this compilation. Critics described his reading of Brahms' Paganini Variations and the Bach Chaconne arranged by Busoni as 'exemplary' and said that Arturo Benedetti Michelangeli (1920-1995) had 'set new benchmarks' with his recordings of Debussy, Ravel and Rachmaninov. In their book 'Pianistenprofile', a handbook of 600 pianists' biographies published by Barenreiter, lngo Harden and Gregor Willmes describe ABM's Scarlatti Sonatas as exhibiting 'flawless, hitherto unsurpassed tonal perfection and harmony'.