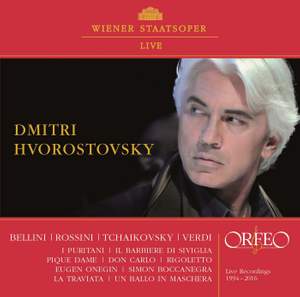 It’s an interesting collection, The excerpts aren’t always the obvious ones…Some of the singing isn’t terrific…but Prince Yeletsky in the Queen of Spades (1999) was the perfect role for him:... — Gramophone Magazine, November 2018 More…

Dmitri Hvorostovsky stands out above all on this album as a true Verdi baritone: as Posa (Don Carlos), for example, or in Simon Boccanegra in the finale of Act I of Verdi’s eponymous and all too rarely performed opera. By then, Hvorostovsky’s cancer was far advanced, and yet, the depth of his characterisation remains as flawless as ever. The climax is his moving aria as Anckarström in the original Swedish version of Un ballo in maschera, in which he fears he has lost the love of his wife. It ends with the bitter-sweet resignation of 'O dolcezze perdute, o speranze d’amor'. Before that, Hvorostovsky is to be heard in the role of a father convinced of himself and of his own moral standards, Padre Germont (La Traviata), who persuades Violetta (Marina Rebeka) to renounce her beloved Alfredo. The performance is that of November 29, 2016; scarcely a year later, Hvorostovsky succumbed to the cancer with which he had wrestled for so long – aged just 55. Here we hear the pitiless rigour with which, despite feigned sympathy, he pronounces the fate of a dying woman and takes from her the best thing she had ever known – true love.

It’s an interesting collection, The excerpts aren’t always the obvious ones…Some of the singing isn’t terrific…but Prince Yeletsky in the Queen of Spades (1999) was the perfect role for him: aristocratic, luscious, long legato lines, beautifully poised and noble. Hvorostovsky at his finest.

A valuable tribute to one of the greatest singers of his generation.

He delivers with nuance and subtlety the scene at the end of Act 1 of Onegin…Unsurprisingly, there is some diminishment in the three items recorded in the year before his death – though not, in fact, a great deal. He hurls himself impressively at the ‘Plebe! Patrizi! Popolo!’ ensemble from Boccanegra…Observant of Germont’s stern character and equally notable for long-breathed lyricism as well as the odd variant in Germont’s line, [the Traviata duet], too, is a considerable achievement.

The late Dmitri Hvorostovsky is presented in a selection of scenes from the Staatsoper, ranging from a smooth Puritani for his debut performance in 1994 to a dignified Germont in Traviata, caught on the last evening he sang in the house in 2016. His mastery of rich-toned legato is wonderful to hear, and this is a moving tribute.