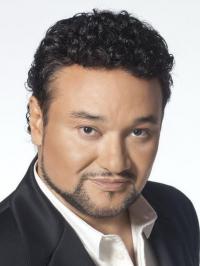 Vargas was born in Mexico City in 1960 and began singing aged 9 as a member of the Basilica of Guadalupe Boys’ Choir, studying first in his native Mexico and (following victory in the Enrico Caruso Competition in 1986) on the Vienna State Opera’s training programme. He made his international debut in 1992 as Edgardo in Lucia di Lammermoor at the Metropolitan Opera, and appeared at La Scala (as Fenton in Falstaff) the following year. He is widely acclaimed in bel canto roles including Nemorino L’elisir d’amore, Fernando La favorita, Roberto Devereux and most of Rossini’s heroes, in Verdi’s lyric roles, and in French repertoire such as the title-roles in Gounod’s Faust and Massenet’s Werther. His discography includes Narciso (opposite Cecilia Bartoli’s Fiorilla) on Riccardo Chailly’s Gramophone Award-winning recording of Rossini’s Il turco in Italia, Lensky from the Metropolitan Opera under Valery Gergiev, and numerous recital-discs of operatic arias (‘Vargas has the heroic heft so lacking among today’s leading tenorini’ – The Sunday Times on his 2013 album of verismo on Capriccio). Honours include the ECHO Klassik Singer of the Year Award in 2001 and Opera Now’s Artist of the Year prize in 2000.