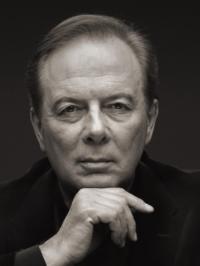 The Italian bass Ferruccio Furlanetto was born in 1949 in Sacile and made his debut at La Scala in 1979 as Banco in Verdi’s Macbeth under Claudio Abbado; since then he has enjoyed a major international career and a particularly close relationship with the Metropolitan Opera, where he first appeared in 1980. Though his repertoire encompasses comic roles such as Basilio in Rossini’s Il barbiere di Siviglia[, he is especially associated with the title-roles of Mussorgsky’s Boris Godunov and Massenet’s Don Quichotte (‘Furlanetto’s dark round tone is perfect for the role…his combination of sadness and dignity is most affecting’ – BBC Music Magazine on his recording with Gergiev and the Mariinsky, issued in 2012), and King Philip in Verdi’s Don Carlo, which he has recorded for James Levine, Herbert von Karajan and Antonio Pappano. His discography includes Sparafucile on Jean-Pierre Ponnelle’s 1982 production of Rigoletto and the title-role on Daniel Barenboim’s recording of Don Giovanni.