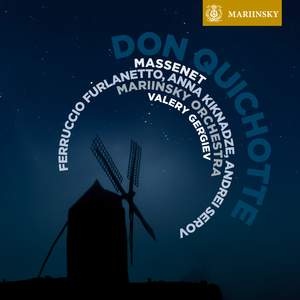 Furlanetto's basso cantante makes a fine compromise [between Ghiaurov and van Dam] - rich but smooth in fluent French - and Valery Gergiev whips up the score more vigorously than either predecessor...Gergiev... — BBC Music Magazine, April 2012, 4 out of 5 stars More…

Italian bass Ferruccio Furlanetto is one of the most sought-after interpreters of French, Italian and Russian repertoire.

Here he joins Valery Gergiev and the Mariinsky orchestra for a sumptuous recording of Massenet’s final great opera. Gergiev is no stranger to conducting Massenet, having recorded an outstanding performance of 'Hérodiade' in 1995 with Renée Fleming and Placido Domingo.

'Don Quichotte', Massenet’s comédie-héroïque, is a tale of heroism, adventure and unrequited love. The plot relates only indirectly to the great novel by Miguel de Cervantes and more likely refers to the play Le chevalier de la longue figure, by the poet Jacques Le Lorrain. Massenet, nearing the end of his career, probably identified with the character of Don Quichotte, and fell in love with the mezzo-soprano Lucy Arbell, who played Dulcinée in the first performance of the work.

Praised for his vast range, thundering vocal power, and exceptional acting ability, Ferruccio Furlanetto has performed at the world’s leading opera houses, including La Scala, the Royal Opera House, the New York Metropolitan Opera and the Mariinsky Theatre in St Petersburg. His 2011-12 season is dominated by performances of 'Boris Godunov' with the Chicago Lyric Opera, Vienna Staatsoper and the Teatro Massimo (Palermo). Furlanetto will also sing Méphistophélès in Gounod’s 'Faust', Don Basilio in 'Il Barbiere di Siviglia' and Silva in 'Ernani' at the Met.

Mezzo-soprano Anna Kiknadze is a principal soloist of the Mariinsky Theatre, St Petersburg. Highlights of her early career include being a finalist at the 2001 Cardiff Singer of the World Competition, 2002 Placido Domingo Operalia Competition in Paris and the International Rimsky-Korsakov Competition in St. Petersburg.

Furlanetto's basso cantante makes a fine compromise [between Ghiaurov and van Dam] - rich but smooth in fluent French - and Valery Gergiev whips up the score more vigorously than either predecessor...Gergiev has excellent surround sound, and this new version comes recommended

[Furlanetto's] dark round tone is perfect for the role. He can't resist uttering his trademark sob now and then but much can be forgiven for his beautiful legato...Furlanetto's combination of sadness and dignity is most affecting...Anna Kiknadze finds heart as well as frivolity in Dulcinee's music. Gergiev and his chorus and orchestra are on fine form and the recorded sound, in the experienced hands of James Mallinson, is excellent.

[Furlanetto] sings Quichotte with precisely the right mixture of pathos and whimsical elegance...Anna Kiknadze’s dusky, coppery mezzo is the perfect instrument for the voluptuous yet melancholy Dulcinée...there’s some slightly mushy French from most of the principals but there’s so much chutzpah in the singing and playing (particularly in the roistering, flamenco-style crowd scenes) that it hardly matters.

[Furlanetto] is moving in Quichotte’s prayer and death scene. Gergiev surprises with his sensitive handling of Massenet’s delicately perfumed idiom, relishing the atmosphere of his Spanish pastiche.

[Furlanetto] is quite astonishingly moving in it, as is Andrei Serov as Sancho Pança. The rest of it is more equivocal. Gergiev is at his best when the music is most tender, but goes hell-for-leather at the fiesta scenes, which work better when less pressured.