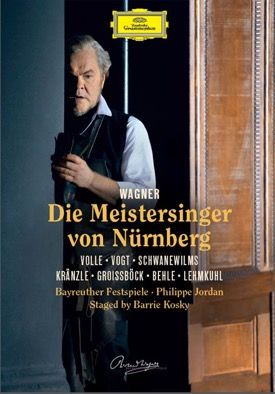 In Barrie Kosky’s spirited but uneven 2017 staging of Wagner’s comedy there are splurges of ideas…The performances of the cast are of a high standard dramatically and mostly musically. Volle... — Gramophone Magazine, October 2018 More…

After Tristan und Isolde (2016) and Parsifal (2017) this is the third installment of the exclusive, multiyear partnership between Deutsche Grammophon and the Bayreuth Festival, in which the Yellow Label is the exclusive audiovisual partner of the mythical Wagner festival, releasing each edition's new production on DVD/Blu-ray.

This year, Deutsche Grammophon are proud to release on DVD/Blu-ray the celebrated production of Die Meistersinger von Nürnberg which was premiered on 25 July 2017, staged by Barrie Kosky and conducted by Philippe Jordan.

In Barrie Kosky’s spirited but uneven 2017 staging of Wagner’s comedy there are splurges of ideas…The performances of the cast are of a high standard dramatically and mostly musically. Volle now paces himself well and Lehmkuhl is a magical and unclichéd Magdalene.

Kosky invites us to warm to Wagner the craftsman at the same time as confronting his flaws as a human being...The cast is a mixture of Bayreuth veterans and debutants, and both camps cover themselves in glory...At the heart of it all is Michael Volle’s towering interpretation of Sachs/Wagner: he inhabits both personae with tremendous authority…It’s an immensely thought-provoking and ultimately very moving take on this most conflicted of operas.