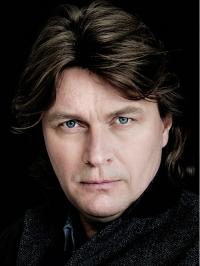 Born in Heide in 1970, Vogt began his career as a horn-player and spent several years as principal horn of the Hamburg Philharmonic before re-training as a singer at the Lübeck Academy of Music, after which he spent five years as an ensemble-member at the Semperoper Dresden. In 2002 he sang his first Lohengrin, which has become his signature-role: endowed with a far lighter, sweeter voice than is usually heard in Wagner and other heroic repertoire, his ethereal timbre has won him considerable acclaim as the other-worldly ‘Swan-Knight’ as well as in roles including Walther von Stolzing (Die Meistersinger), Siegmund (Die Walküre), Paul (Die tote Stadt), and Florestan (Fidelio). His discography includes three complete Lohengrins (under Sir Mark Elder, Marek Janowski, and Andris Nelsons), a Wagner album on Sony, and the title-role in Uwe Eric Laufenberg’s controversial Parsifal on DVD from the 2016 Bayreuth Festival.