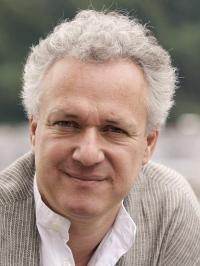 Johannes Martin Kränzle is a German baritone who is particularly associated with the role of Beckmesser in Wagner’s Die Meistersinger, which he has performed at Covent Garden, the Metropolitan Opera, Glyndebourne and Bayreuth. (His performances from the last two houses, in productions by David McVicar and Barrie Kosky respectively, are available on DVD and Blu-ray).

Born in Augsburg in 1962, Kränzle originally trained as a violinist and subsequently considered careers as a composer and a music-theatre director before training in Frankfurt as a singer and taking up a contract at Dortmund in 1987. His repertoire also includes Don Alfonso in Così fan tutte (available on DVD and Blu-ray from Covent Garden), Alberich in The Ring Cycle (with which he made debuts at the Staatsoper Berlin and La Scala, both under Daniel Barenboim),Berg’s Wozzeck, Andrei in Prokofiev’s War and Peace, and the title-role in Wolfgang Rihm’s *Dionysos*, which he created in 2010.

Find out more at https://en.wikipedia.org/wiki/Johannes_Martin_Kränzle