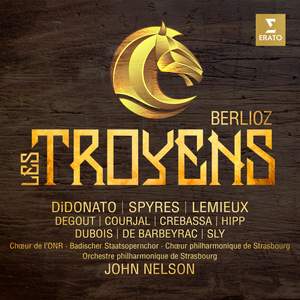 Nelson drives the drama with unforced tempos but ample theatrical vitality and grandeur…Spyres isn’t as heroic an Aeneas as Jon Vickers…but sings with lyrical grace and spirit and decent if not... — BBC Music Magazine, Christmas 2017, 5 out of 5 stars More…

Ahead of his performance and recording of the Grande Messe des Morts at St Paul's Cathedral tomorrow evening to mark the 150th anniversary of the composer's death, the American conductor talks to Katherine about his fifty-year relationship with music which 'lit something up in me that's remained all my life'. 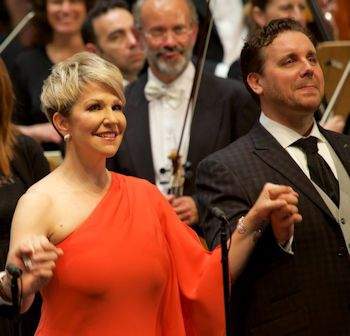 This new Erato recording of the complete, uncut score of Les Troyens is drawn from two concert performances that took place over the Easter weekend in April 2017 in the city of Strasbourg in eastern France. A magnificent cast of singers, predominantly Francophone, assembled under the baton of John Nelson, an acknowledged master of Berlioz’s music who has conducted Les Troyens more frequently than anyone else over a period of more than 40 years; he made his name with the piece when he led performances at New York’s Metropolitan Opera in 1974 and enjoyed great acclaim for a production at the Frankfurt Opera shortly before the Strasbourg concerts.

Nelson drives the drama with unforced tempos but ample theatrical vitality and grandeur…Spyres isn’t as heroic an Aeneas as Jon Vickers…but sings with lyrical grace and spirit and decent if not perfect French. Joyce DiDonato sings Dido with characteristic security and expressiveness…Cyrille Dubois and Hanna Hipp are attractive as Iopas and Anna.

[Nelsons] has a live-wire grip on the score and gets detailed playing from his orchestra...A key strength is the casting of French-speaking singers in so many roles...The main selling point, though, is the American pair of singers as Dido and Aeneas...Spyres sounds credibly the warrior hero, while managing his very high role with some elegance...DiDonato is by turns fiery and sensuous as the legendary Carthaginian queen.

Nelson is in no great rush, allowing Berlioz’s music time to breathe where necessary…Nelson’s cast is simply to die for. Marie-Nicole Lemieux captures all the wildness and unhinged desperation of Cassandre, her burnt caramel contralto utterly compelling…Énée is thrillingly sung by Michael Spyres…DiDonato’s vehement response to Énée’s desertion reveals her as a great tragedienne…In short this is a peach of recording.

This set's many merits (and fine sonic engineering) make it a highly worthwhile candidate for a new listener's 'first' Troyens.

The Strasbourg orchestra play out of their boots for Nelson throughout: the entire score glitters, and the woodwind in particular cover themselves in glory ...Spyres’s Énee is a revelation – the tremendously taxing role could have been written for him...The process of working on this role seems to have unleashed darker colours and a formidable ‘blade’ in [DiDonato's] silvery mezzo, and she captures every nuance of Carthage’s ‘queen of hearts.

For DiDonato, Didon marks a watershed: she has done nothing finer on disc...Even more arrestingly, Spyres surpasses the fabled Jon Vickers as Enée (Aeneas), with his lighter, higher, more “wieldy” tenor...Lemieux’s Cassandre is in the Crespin class, the finest on any complete recording. A triumph.

Nelson never allows the dramatic pace to slacken...Some might find [DiDonato's] singing mannered and over-stylised at times, but its dramatic commitment is undeniable and Dido’s final aria is a tremendous emotional tour de force...[Spyres] offers a much more human and humane figure [than Vickers], with singing that never loses its elegance and stylish flexibility...this is now unquestionably the version of Berlioz’s masterpiece to have at home.

Berlioz’s epic opera has rarely been given such luxury treatment as in this magnificent live recording from France. Mr. Nelson, a “Troyens” veteran many times over, expertly handles the unwieldy score with help from starry singers.

American conductor John Nelson is a Berlioz specialist and here he shows why and how: his grasp of the style and control of his forces in this live recording are miraculous. He makes perfect sense of Berlioz’ changes of mood and tempo, which in lesser hands can jolt, maintaining propulsion without being rushed, yet allowing his performers to languish over a detail or phrase. He also brings out the colours of this score in all its eccentric glory. Perhaps best of all is Joyce DiDonato’s Didon, warm and sensual, her final pages truly the stuff of great tragedy.