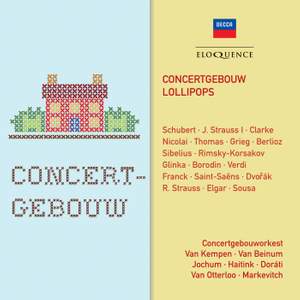 This highly appealing collection of light-orchestral classics gathers up eighteen years in the history of one of the world’s most celebrated orchestras during the golden age of the LP.

Ever since its foundation in 1883, the Concertgebouw Orchestra of Amsterdam has been blessed with a hall that, to all intents and purposes, belongs to them. Unlike many of their rivals, they not only perform but rehearse and record in the hall. The hall’s own superb acoustic has always been a further attraction for record companies, and between 1950 and 1968 microphones were frequently set up to record the orchestra.

Those microphones mostly belonged to Decca and to the fledgling local Philips company, and on the podium were not only its music directors – during this period, Eduard van Beinum and, from 1961, Bernard Haitink – but also celebrated guest conductors. There were long-established maestros and friends of the orchestra such as Eugen Jochum, Paul van Kempen and Willem van Otterloo, but also younger, dynamic maestros including Antal Doráti.

When recording sessions went well, and the main works were in the can ahead of schedule, the time was not wasted, but filled with shorter pieces. These would both conveniently fill out a short-measure LP and be guaranteed enticements to the ever-growing market of consumers, though in some cases, the reserve pieces were only released on a 45-rpm record, which sometimes disappeared from the catalogue after a short period.

Many of those recordings, often made on the hoof with a delightful spontaneity that shines through even now, are gathered on this set for the first time. Typical of them is The Stars and Stripes Forever. This was put on tape one day in September 1958 without rehearsal, played straight through, and at the end Van Beinum addressed the orchestra: ‘Now that, gentlemen, is a recording!’

Sometimes the juxtapositions of conductor and repertoire are immediately arresting: not only Van Beinum in Sousa but Haitink in Glinka and Verdi. The waltz-suites from Der Rosenkavalier play to Jochum’s under-rated strengths as an operatic conductor. Igor Markevitch conducts the Polovtsian Dances and Russian Easter Festival Overture to the manner born.

The booklet includes an informative and insightful note by Niek Nelissen, as well as cover illustrations of the LPs and EPs that gave rise to this unique collection.