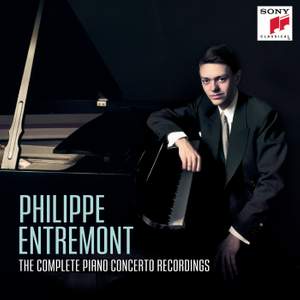 II. Menuetto I and II

Pt. 1a, The Prologue. Lento moderato

Pt. 2b, The Masque. Extremely Fast

Jolivet: Concerto for Piano and Orchestra

Sony Classical celebrates the 80th birthday of French pianist & conductor Philippe Entremont with the first-ever release of his complete concerto recordings in a limited original jacket collection. In 1958 Entremont’s debut concerto recordings for Columbia Masterworks of the Grieg A minor and Rachmaninoff Rhapsody on a Theme by Paganini helped put the 23-year-old pianist on the international map. Generations of American music lovers grew up with the Entremont/Ormandy Rachmaninoff 1st and 4th, Saint-Saëns 2nd and 4th, Ravel G major, Liszt 1st and 2nd Concertos and Falla’s Nights in the Gardens of Spain, plus the pianist’s highly regarded collaborations with Leonard Bernstein and the New York Philharmonic in the Tchaikovsky 1st, Rachmaninoff 2nd, and Bartók’s 2nd and 3rd Concertos. We are pleased to make available Entremont’s Khachaturian Concerto and Liszt Hungarian Fantasia with Seiji Ozawa leading the New Philharmonia Orchestra, and a complete survey of Saint-Saëns’ works for piano and orchestra with L’Orchestre du Capitole de Toulouse under Michel Plasson. Born in Reims on June 7, 1934, Entremont studied at first with his musician parents and then with Marguerite Long. As a teenager at the Paris Conservatoire, Entremont won many prizes, and, at sixteen, became a Laureate at the International Long/Thibaud Competition. The following year he began his major career, starting with a top prize in the Brussels Queen Elisabeth Competition, and subsequent tours through Europe, the United States and South America. He made his conducting debut on disc in 1968 directing the Collegium Musicum of Paris from the piano in Mozart’s Concertos Nos. 13 and 17, increasing his podium profile in later life as music director of the New Orleans Symphony (1980–86), principal conductor (1986–88) and music director (1988–89) of the Denver Symphony. He currently serves as Principal Guest Conductor for the Shanghai Broadcasting Symphony Orchestra and is Conductor Laureate of the Vienna Chamber Orchestra and the Israel Chamber Orchestra.