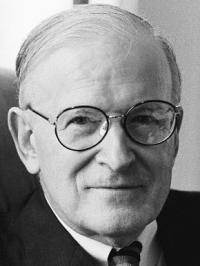 Robert Craft was born in Kingston, New York on 20th October 1923 and studied at the Juilliard. A man of varied musical interests from an early age, it is for his close association and cooperation with Igor Stravinsky that he is mostly remembered.

Prior to meeting Stravinsky in 1948, Craft had taken an interest in the early and the contemporary - studying particularly the works of Monteverdi, Schütz and Gabrieli, alongside the Second Viennese School of Schoenberg, Webern and Berg.

The year 1948, though, proved a turning-point, as it saw Craft begin work as an assistant to the composer - firstly as an amanuensis and then as more of an equal artistic partner, though the relationship was always in flux. He contributed significantly to several of Stravinsky's libretti, premiered many of his works and wrote extensively on his music both before and after his death.

There are few works of Stravinsky's that Craft did not record; a considerable volume of recordings of Schoenberg and Webern further testifies to his tireless championing of new repertoire, which continued right up to the end of his life.

These, combined with his numerous works on Stravinsky (many of which reproduce conversations and interviews, and are thus valuable primary sources for musicologists today) are his lasting legacy.

Find out more at https://en.wikipedia.org/wiki/Robert_Craft

David remembers the venerable Stravinskian Robert Craft, who has died at the age of 92.