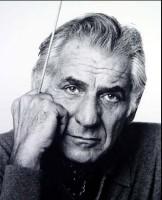 Leonard Bernstein was an American conductor, composer, pianist, music educator, author, and humanitarian. Among the most important conductors of his time, he was also the first American conductor to receive international acclaim. According to music critic Donal Henahan, he was "one of the most prodigiously talented and successful musicians in American history".

As a composer he wrote in many styles, including symphonic and orchestral music, ballet, film and theatre music, choral works, opera, chamber music and works for the piano. His best-known work is the Broadway musical West Side Story, which continues to be regularly performed worldwide, and was made into an Academy Award–winning feature film. His works include three symphonies, Chichester Psalms, Serenade after Plato's "Symposium", the original score for the film On the Waterfront, and theater works including On the Town, Wonderful Town, Candide, and his MASS.

Watch our exclusive video-interview with the London Symphony Orchestra's Music Director about their live recording of Bernstein's raucous paean to The City That Never Sleeps, out now on the orchestra's own label.

Browse all further reading about Bernstein