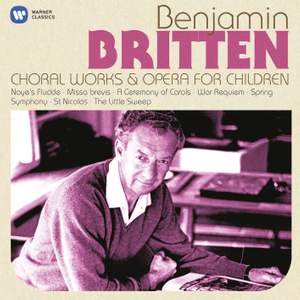 I. (b) Requiem aeternam. "What-Passing Bells"

IV. (c) Sanctus. "After the Blast of Lightning from the East"

V. Agnus Dei. "One Ever Hangs"

I. Introduction. Shine Out

VIII. Out on the Lawn I Lie in Bed

IX. When Will My May Come

I. In a Garden Shady

III. There Is No Rose

IV. (a) That Yongë Child

V. As Dew in Aprille

II. For I Will Consider My Cat Jeoffry

III. For the Mouse Is a Creature of Great Personal Valour

IV. For the Flowers Are Great Blessings

V. For I Am Under the Same Accusation with My Saviour

VI. For H Is a Spirit and Therefore He Is God & VII. For the Instruments Are by Their Rhimes

VIII. Hallelujah from the Heart of God

II. The Birth of Nicolas

III. Nicolas Devotes Himself to God

IV. He Journeys to Palestine

V. Nicolas Comes to Myra and Is Chosen Bishop

VII. Nicolas and the Pickled Boys

VIII. His Piety and Marvellous Works

IX. The Death of Nicolas

Ensemble. "Is He Wounded?" (Sam, Children)

Ensemble. "O Why Do You Weep" (Rowan, Sam, Children)

Aria. "Soon the Coach Will Carry You Away" (Juliet)

Variation III. Jesu, as Thou Art Our Saviour

Variation V. In the Bleak Mid-Winter

"Lord Jesus, Think on Me" (Congregation)

"I God, That All This Worlde Hath Wroughte" (God's Voice, Noye)

"Wyffe, in This Vessell We Shall Be Kepte" (Noye, Mrs Noye)

Britten: The Company of Heaven, Pt. 1

Britten: The Company of Heaven, Pt. 2

Britten: The Company of Heaven, Pt. 3

VIII. Funeral March for a Boy

IX. Whoso Dwelleth Under the Defence of the Most High

X. There Came out Also at This Time

Praise We Great Men: II. Praise We the Just

This special collection of his works showcases the way in which the composer’s love of poetry formed a crucial basis for much of his choral and operatic music; inspired by poets such as Auden, Smart and Hopkins, Britten crafted their works into compelling narratives. His imaginative text setting and the artful melodies of works such as Rejoice in the Lamb, A Ceremony of Carols and the iconic War Requiem have captivated listeners throughout the 20th century and beyond. Among the world-class performers featured in the collection are Robert Tear, Janet Baker, Elisabeth Söderström and the Choir of King’s College, Cambridge.

This box set is part of our series of Britten releases to mark the composer’s centenary.