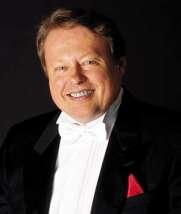 The English conductor, Richard (Sidney) Hickox, studied at the Royal Academy of Music in London from 1966 to 1967, and was an organ scholar at Queen’s College Cambridge from 1967 to 1970.

In 1971 Richard Hickox founded in London the Richard Hickox Singers & Orchestra, with which he gave programs of works ranging from the 14th century to the present era. He also founded the City of London Sinfonia in 1971 and is its Music Director, and following a long association with the London Symphony Orchestra he is their Associate Guest Conductor.