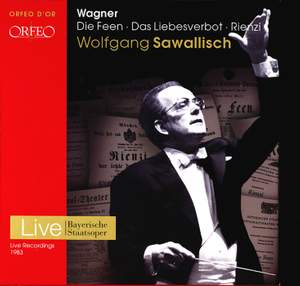 In this year of his 200th birthday, Richard Wagner’s three early operas are enjoying unusual prominence: several staged productions of 'Das Liebesverbot' are planned, while his breakthrough work 'Rienzi' and even his first opera, 'Die Feen', are to be spotted (although the latter is usually given in concert performance). However, to this day it is a rare thing to find all three played at the same opera house, in the same season, under the same conductor as was the case at the Bavarian State Opera in 1983 under Wolfgang Sawallisch.

Sawallisch, who passed away just a few weeks ago, was the Director of the State Opera for many years. In all three of these operas he confirmed his Wagnerian reputation as a supreme proponent of a marvellous, fluid style of music-making that was devoid of pathos. This was to the benefit of his ensemble of singers, who were largely spared the dangers of a heavy, cumbersome Wagner performance style, even though several of their roles undoubtedly demanded great dramatic ability. This requirement was fully met by Linda Esther Gray as Ada in 'Die Feen' and by Sabine Hass as Isabella in 'Das Liebesverbot', for example. With René Kollo as the title hero in 'Rienzi' and Hermann Prey as the governor Friedrich in 'Das Liebesverbot', these operas featured German singing stars of the day who both had a lyrical approach to Wagner and to whom great clarity of text was paramount. Arindal in 'Die Feen', the other murderous tenor role that is to be found in Wagner’s 'sins of youth', was sung by John Alexander, who established his international career primarily in Italian repertoire. This was also the case with June Anderson, who sings the role of Arindal’s sister, Lora.

Both in 'Die Feen' and in 'Rienzi', the 'younger' generation of Cheryl Studer and Jan-Hendrik Rootering made a lasting mark, and, in the State Opera ensemble under Sawallisch’s direction they were inexorably led towards future stardom.

This new CD box from ORFEO, in which these operas, hitherto released individually, are now available in a limited special edition. This is more than just a contribution to the Wagner year; it is a homage to an era of opera in Munich.