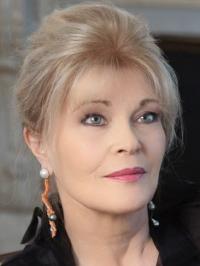 June Anderson was born in Boston in 1952 and read French at Yale University, studying singing privately with Robert Leonard in New York rather than following a traditional conservatoire route; she had been a finalist at the Metropolitan Opera National Council Auditions aged just 17, and continued to sing alongside her academic studies, performing the role of Gilda in Rigoletto at the age of 18. Her early career was spent at New York City Opera, where she debuted as Queen of the Night in 1978 and also sang roles including the three heroines in Les contes d’Hoffmann, Donna Elvira in Don Giovanni and Violetta in La Traviata.

Anderson relocated to Europe in the early 1980s and quickly built a reputation for the dramatic coloratura roles of the bel canto repertoire, including Amina in La sonnumbula, Elvira in I puritani and the title-role in Rossini’s Semiramide (she sang the latter role to great acclaim at the Metropolitan Opera in 1990, opposite Marilyn Horne and Samuel Ramey). Since the 2000s, her repertoire has also included the title-roles in Bellini’s Norma, Donizetti’s Lucrezia Borgia and Strauss’s Daphne and Salome, Pat Nixon in John Adams Nixon in China, and Madame Lidoine in Poulenc’s [Dialogues des Carmelites.

Find out more at https://en.wikipedia.org/wiki/June_Anderson