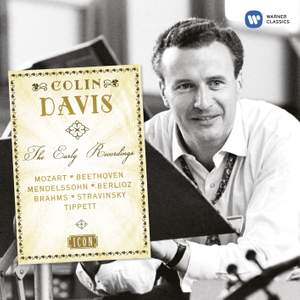 I. Adagio - Allegro ma non troppo (Harold in the Mountains)

Stravinsky: Oedipus Rex (Opera-oratorio in two acts · Text by Jean Cocteau after Sophocles · Translated into Latin by Jean Daniélou · English version of the narration by Carl Wildman) (2003 - Remaster), Act I

The version of Oedipus Rex which you are a

Oedipus questions the fountain of truth...

The quarrel between the princes brings Jo

A shepherd, the witness to the crime, app

And now you will hear the messenger (Spea

Sir Colin Davis was born on 25th September, 1927 in Weybridge and hence this year he celebrates his 85th birthday. His instrument was the Clarinet which he studied at the Royal College of Music and was a bandsman in the Household Cavalry. His inability to play the piano hindered his wish to be a conductor as he was refused entry into the RCM conducting class as well as an apprenticeship in opera houses.

He gained experience informally with a group of RCM students and in his early 20’s his Mozart performances with the Chelsea Opera Group marked him out for potential greatness. At the age of 30 he was appointed assistant conductor of the BBC Scottish Orchestra and two years later an indisposed Otto Klemperer allowed him the opportunity to conduct Don Giovanni at the Festival Hall. This year, 1959 also marks his recording debut – appropriately in Mozart.

In 1960 he replaced an ill Beecham at Glyndebourne in Die Zauberflöte and the following year he was appointed musical director of Sadler’s Wells Opera where he added success in Stravinsky, notably Oedipus Rex, to his Mozart and introduced the music of Weill and Janácek to British audiences. It was during this period that the solo orchestral recordings together with Oedipus Rex were made; the Berlioz and Tippett concerto recordings were made in 1962 and 1963 respectively.

By 1964 he was in increasing demand for orchestral concerts and he left Sadler’s Wells.

Two years later he made his Metropolitan Opera debut with Peter Grimes and in 1967 started his four year tenure as principal conductor of the BBC Symphony Orchestra where he became a hero to the younger members of the Prom audience for his adventurous programming. Following his successes at the Royal Opera, where he made in debut in 1965 (he had conducted the Royal Ballet five years previously), he succeeded Solti as musical director in 1971. He was knighted in 1980.