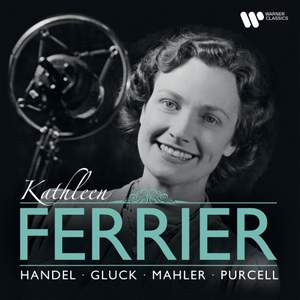 The voice is unique, its emotional power palpable after all these years. — The Observer, 16th April 2012 More…

Maurice Greene, Stanley Roper: I will lay me down in peace (from anthem 'O God of my righteousness')

Purcell: Let us Wander not Unseen (based on music from The Indian Queen, Z630)

Ballet of Shepherds and Nymphy (Act I)

Ballet of the Heroes (Act II)

Recording of the Week,  Kathleen Ferrier

On the centenary of Ferrier’s birth, Katherine pays to tribute to the great Lancashire contralto and explores her legacy on disc via two comprehensive commemorative sets from Decca and EMI, which includes folksongs, Bach and Mahler.

Issued to mark the centenary of Kathleen Ferrier’s birth, this 3CD set brings together for the first time all the EMI recordings by this great contralto, including two previously unissued tracks. In addition the booklet features three EMI publicity photos rarely seen since she first signed a contract with HMV/Colombia in 1944

Kathleen Ferrier (22 April 1912–8 October 1953) remains one of the best-loved British singers of our time. The eminent vocal expert Alan Blyth wrote of her in 1998: ‘Kathleen Ferrier, a legend in her own lifetime, has certainly become one since her untimely death in 1953. Her professional life, lasting little more than a decade, saw her rise from the obscurity of appearing with choirs in the north of England to the eminence of an international career in the company of such conductors as Barbirolli, Walter and Klemperer. It was an extraordinary transformation in every respect, but one wholly justified by the dignity and conviction of her singing and the commitment of her interpretations.’

CD1 begins with four test recordings of pieces by Gluck, Brahms and Elgar recorded by producer Walter Legge in June 1944 but not issued until 1978. Ferrier signed a one-year contract with EMI in September 1944 and her first commercial release was the two arias by the Baroque composer Maurice Greene that follow. Then come two Handel solos and five duets with soprano Isobel Baillie of compositions by Purcell and Mendelssohn. These completed Ferrier’s EMI contract and she then moved to Decca.

In 1949 Ferrier came back to EMI to record Mahler’s Kindertotenlieder in London with the Vienna Philharmonic Orchestra conducted by Bruno Walter, the great Mahlerian who had introduced Ferrier to this work, which closes CD1

CD2 begins with four items recorded at a rehearsal in June 1950 for a concert of the Bach Mass in B Minor in Vienna with the Vienna Symphony Orchestra conducted by Karajan. EMI was setting up its recording equipment in the Musikvereinssaal for another project while the rehearsal was taking place and the engineer, as a test, turned on the tape machine to capture, almost complete, these four precious Ferrier tracks, which include two solos and two duets with the soprano Elisabeth Schwarzkopf.

Then comes a complete performance of Ferrier’s signature operatic role, that of Orfeo in Orfeo ed Euridice by Gluck. This live recording dates from a radio broadcast in July 1951 in Amsterdam.

CD3 concludes with two bonus tracks; these are reserve takes of the first and the fifth movements of Kindertotenlieder being issued here for the first time. This work was originally recorded on 12-inch waxes, with a tape machine running as safety back-up, as was EMI’s practice in 1949. Masters from the waxes were used for most of the original 78-rpm sides, but for the release of the work on CD, the back-up tapes were used, and these reserve ‘takes’ have also survived.

The voice is unique, its emotional power palpable after all these years.

The voice is unmistakable: richly textured, darkly coloured, ringed with nobility, sadness too...In some tracks she almost sounds like the darker sibling of counter-tenor Alfred Deller, another vocal wonder of the time. But the resemblance is fleeting. And as this set proves, the longer Ferrier sang the more uniquely expressive she became. Even now, almost 60 years on, her death still leaves a hole.

plenty of treats on EMI’s contribution to the celebration