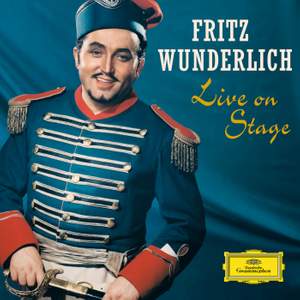 Unreleased arias from Vienna and Munich

The pearl of great price...the Mozart tenor who could sound both elegant and manly...His 'Il mio tesoro' drops not a semiquaver and takes the long phrases with confident ease. At all times he... — Gramophone Magazine, January 2011 More…

“The ‘sudden’ impact of this artist’s singing is so spontaneous, so dead right, we just dispense with all the analytical microscopy, sit back and delight in the forceful combination of a sunlit Mediterranean voice quality blended with a Central European musical and dramatic intelligence that only a truly charismatic tenor can provide. Amongst his amazing achievements he certainly proved that Mozart could be done with directness and clarity without sacrificing any of the interpretive sophistication that composer demanded, and he showed a whole generation that Richard Strauss did not present insurmountable vocal challenges to tenors who know what they’re doing.” Joseph Calleja

Fritz Wunderlich, Germany's greatest tenor in the 20th century - and one of the greatest tenors of all time - would have celebrated his 80th birthday on 26th September 2010. We commemorate the occasion with an exceptional album of Magic Moments - arias and scenes, almost all first-time releases, taken from live performances at the Vienna State Opera and the Bavarian State Opera, recorded between 1963 and 1966, the year of Wunderlich's death.

The music is by Mozart (The Magic Flute, The Abduction from the Seraglio, Don Giovanni), Rossini (The Barber of Seville - sung in German!) and Richard Strauss (Capriccio, Der Rosenkavalier, Daphne, Die schweigsame Frau) - full details above.

The live quality of the recordings - meticulously remastered by our engineers at the Emil Berliner Studios - gives an extra frisson to Wunderlich's calling-card, the Portrait Aria from Magic Flute (Dies Bildnis ist bezaubernd schön), to the high jinks of The Barber, and the Italian Tenor's Aria from Rosenkavalier.

Also present on the recording: the great Anneliese Rothenberger, who died just recently (Pamina) and Lucia Popp in Strauss's Capriccio

Conductors include Herbert von Karajan, Karl Böhm, Josef Krips and Georges Prêtre. Many of the performances are the from the premières of the productions in question.

The pearl of great price...the Mozart tenor who could sound both elegant and manly...His 'Il mio tesoro' drops not a semiquaver and takes the long phrases with confident ease. At all times he makes his voice an instrument of feeling...he even makes us believe that Don Ottavio is at heart a man of action

Live performances demand more from a singer than those made in the studio, particularly how their voices strike an accommodation with the auditorium size. We can hear what Wunderlich really sounded like in various theatres and it becomes even more evident what a loss his premature death meant to the operatic world.

the golden-toned Strauss items — the duet from the famous recording of Daphne with Gueden, the Italian opera singers number from Capriccio and the glorious tenor showpiece from a Kempe-conducted Rosenkavalier — are incomparable.