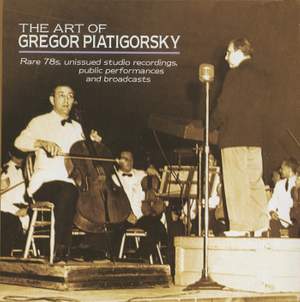 The Art of Gregor Piatigorsky

Piatigorsky: Variations on a Theme of Paganini

Carnival of the Animals: XIII. The Swan

Saint-Saëns: Cello Concerto No. 1 in A minor, Op. 33 (abridged version)

From Jewish Life: I. Prayer

The present collection offers fascinating insight into the artistry one of the great musicians the twentieth century, the legendary cellist Gregor Piatigorsky (1903-1976). The recordings in this collection are either previously unissued studio recordings, or if issued, were not widely distributed when they were initially released, or are previously unissued public performances that were only heard when originally broadcast from the concert hall. This material constitutes a significant portion Piatigorsky’s recorded legacy and provides eloquent evidence of his importance in the world of modern cello playing, especially for those who never had the opportunity to hear him live.