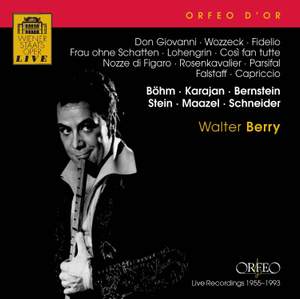 Of all the great singers of the post-War era who began their international careers at the Vienna State Opera, Walter Berry was probably without peer.

This portrait of him showcases his flexibility in performing both the comic and the tragic repertoire, in bridging the lyrical and heroic and in being able to do all this in bass or baritone register, with selections from the five decades of his work at the Vienna State Opera. Berry died in 2000 but would have been 80 this year. We begin with his Masetto in Don Giovanni and the title role in Wozzeck in 1955 under Karl Böhm.The latter became a role for which Berry was in demand across the world. As Pizarro,Telramund and Barak the dyer he was highly acclaimed in all the great opera houses of the world. For most of his career, he remained a Mozart singer as witty as he was shrewd, as is proven by Leporello's 'Catalogue Aria' and excerpts from his Figaro and Guglielmo.This combination of bonhomie and roguishness found its crowning glory in the shape of Baron Ochs, here in a 1968 recording under Leonard Bernstein, and in a striking Falstaff just a year-and-a-half later. In his later years Berry was still able to build dramatic tension as Klingsor in Parsifal, with Leonie Rysanek as his Kundry and, at the close of his career at the Vienna State Opera, he found in Strauss' La Roche another part so ideal that it seemed as if written just for him.