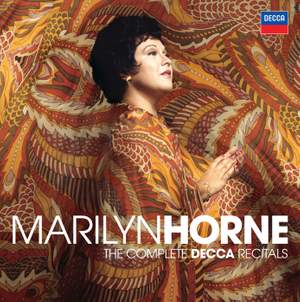 When every single item brings wonderment it is impossible to single out one above the rest, and the recording is outstandingly vivid...her Rossini recital is one of the most cherishable among... — Penguin Guide, 2011 edition More…

O Thou That Tellest Good Tidings to Zion

I Know That My Redeemer Liveth

Foster, S: If You’ve Only Got a Moustache

anon.: Go 'Way From My Window

Cohan: You're a Grand Old Flag

Piantadosi: I didn't raise my boy to be a soldier

anon.: The Battle Hymn of the Republic

The great American mezzo-soprano Marilyn Horne celebrated her her 70th birthday in January 2004 and that year also marked 50 years since her professional debut.

Horne’s debut in 1954 was in in Los Angeles. That same year her name and voice was brought to many more people than could ever hear her in the opera house through the 1954 film Carmen Jones in which she sang the dubbed voice of Dorothy Dandridge. Her Covent Garden debut was as Marie in Wozzeck (sung in English at that time) in 1964 – she had made her San Francisco debut in 1960 with the same role. It was with Joan Sutherland that Marilyn Horne found the perfect vocal partner and their performances in the great bel canto operas by Rossini, Bellini and Donizetti took the opera world by storm in the 1960s and early 1970s.

By the time she retired in 1998, Marilyn Horne’s long and distinguished career embraced an enormous variety of operatic roles, as well as a wide variety of solo song ranging from Schubert, Schumann and Mahler through to modern American songs. Such a wide repertory was due to the sheer range of her voice and its remarkable flexibility, a voice that could sustain long lines of melody as well as negotiate the most florid vocal pyrotechnics.

Marilyn Horne participated in a number of complete opera recordings (among them classic recordings of Norma and Semiramide with Joan Sutherland) for Decca and also made ten recital programmes.

The complete recitals are now reissued in their entirety as a Collector Edition on 11 CDs and preserve the original sequence of music as presented on vinyl; the original LP cover art is reproduced for the CD sleeves.

When every single item brings wonderment it is impossible to single out one above the rest, and the recording is outstandingly vivid...her Rossini recital is one of the most cherishable among all Rossini records ever issued. The voice is in glorious condition, rich and firm throughout its spectacular range, and is consistently used with artistry and imagination, as well as brilliant virtuosity in coloratura. By any reckoning, this is thrilling singing.