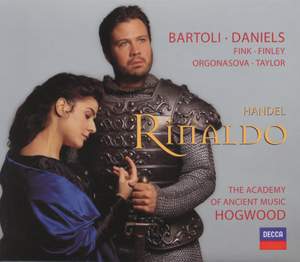 most familiar and unfamiliar opera: familiar because, as his lavish first stage work for London, it has been much written about both by modern historians and by the composer's contemporaries;... — Gramophone Classical Music Guide, 2010 More…

Aria: No, no, che quest'alma

most familiar and unfamiliar opera: familiar because, as his lavish first stage work for London, it has been much written about both by modern historians and by the composer's contemporaries; unfamiliar because the Handel opera revival of recent years has largely passed it by. Although there are numerous recordings of its two hit slow arias – 'Lascia ch'io pianga' and 'Cara sposa' – this is its first complete studio recording for over 20 years. It may not be Handel's most dramatically effective work (Act 3 marks time rather), and its magic effects and transformation scenes no doubt make it a tricky prospect for opera companies, but in many ways its rich orchestration and impressive set-piece arias make it ideal for recording. That much makes this release a welcome sight already; add the de luxe cast Decca has assembled for the purpose and it begins to look irresistible.
Top of the bill come David Daniels as the eponymous crusader knight and Cecilia Bartoli as his love Almirena. Daniels' heart-stopping countertenor voice is one of the marvels of our age. It isn't big, and though he's technically untroubled by the virtuoso runs of the quicker arias, some may feel it lacks some of the heroic power expected of a warrior; but there's an inner strength to it, and in the love music he's utterly convincing. Bartoli is equally impressive, though her singing is less well suited to Handel. She can deliver the most demanding music with almost frightening ease and force, and, as ever, she throws herself into her role, but one can't help thinking that a more natural and unaffected style would have been more appropriate for arias such as 'Lascia ch'io pianga' and 'Augeletti che cantate'. The rest of the cast is almost unwaveringly strong. Daniel Taylor is slightly less technically secure or forceful than the others (which is hardly a criticism), but he does well enough with the opera's least effective role as Goffredo's brother Eustazio.
Christopher Hogwood's direction is typically neat and well-mannered. He isn't a natural opera conductor – others may have found more magic in the enchanted gardens and more sensuality in the sirens who lure Rinaldo, and you sometimes get the feeling that he's rushing the singers at important moments – but he has an unerring sense of tempo, and the opera as a whole is well paced.
The Academy of Ancient Music plays to a high standard, backed up by a startlingly virtuoso performance on the Drottningholm thunder machine and by some genuine birdsong at the beginning of Act 2.
This version may not be the last word on the opera, but for all-round standard of performance and production it currently wins hands down and it will take some beating.

[Daniels] makes an ideal choice for the castrato role of Rinaldo, strong and imaginative in martial music, tenderly expressive in such a poignant aria as Cara sposa...[Bartoli] makes Lascia ch'io pianga one of the highlights of the performance. Luba Organasova is wonderfully contrasted in the fire-eating role of the sorceress...Above all, Christopher Hogwood brings out not only the colour but the vigour of Handel's inspiration.